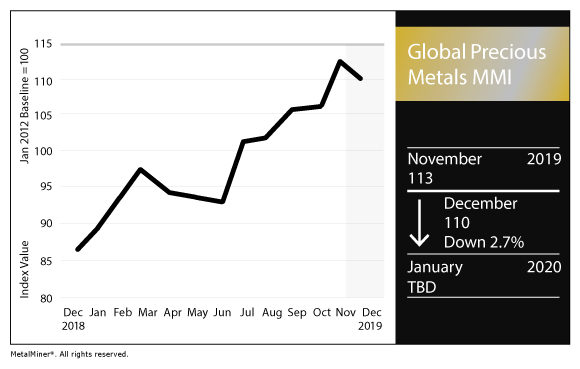 Once again, the spread between U.S. palladium and platinum prices continued to widen this past month.

“Platinum and palladium have shown continued strength in a tight auto-catalyst market with palladium in particular hitting record highs with little sign of a sell-off,” MetalMiner’s Stuart Burns explains. “Fundamentals are trumping sentiment with palladium and platinum — even a downturn in automotive output in Europe and China has not deterred investors focused on the tight supply market and the switch to petrol from diesel ICEs (internal combustion engines).”

Palladium prices have continued to soar, approaching the $1,900/ounce threshold early this week before eventually breaching it.

According to Reuters, a power outage in South Africa — one of the world’s top producers of palladium — impacted output at palladium mines, thus supporting the palladium price.

“Gold has been driven by hopes of a Fed cut and fears over an extension or deterioration in the U.S.-China trade conflict,” said Burns, adding that gold continued to hold steady ahead of the U.S.’s Dec. 15 tariff deadline.

After reaching around $1,550/ounce in September, the gold price dipped since then; thus far in December, however, the price has held steady at around $1,460/ounce.

However, this week the Wall Street Journal reported the U.S. and China would delay the previously announced Dec. 15 deadline, as trade talks with China continue.

In August, the United States Trade Representative said the U.S. would delay imposing tariffs on some products that were part of a $300 billion tariff list on imports from China. The tariffs were initially set to go into effect Sept. 1 before the deadline was pushed back to Dec. 15.

However, White House economic advisor Larry Kudlow, on the heels of the Wall Street Journal’s report, said the Dec. 15 tariffs are “still on the table,” CNBC reported.

MetalMiner’s Belinda Fuller recently delved into the historical negative correlation between gold and the strength of the U.S. dollar.

The two typically move in an inverse relationship  — that is, when one gains, the other typically falls, and vice versa.

Recently, however, gold and the dollar bucked that trend, Fuller explained.

“Both gold and the dollar trended up in value overall, especially from July until September,” she wrote. “However, gold prices gained greater momentum and increased by a greater measure than the dollar. Then, both values fell in September and October.”

However, Fuller added the inverse relationship seemed to return to the scene in November.

What does this all mean in the short and long terms, particularly when monetary policy is thrown in the mix?

“With the overall macroeconomic environment characterized as unstable, gold prices may generally continue to trend higher in the short term, as gold gets used as a hedge,” Fuller wrote.

“However, over a longer period, current monetary policies could weaken prices once more — assuming they take effect as intended.”