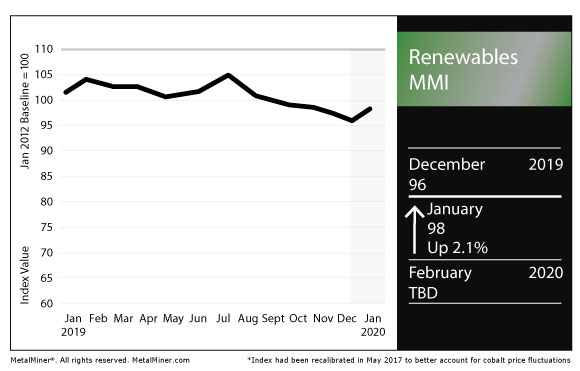 CBS News reported last month that several U.S. tech companies were named as defendants in a lawsuit alleging the use of child labor in cobalt mining operations in Africa.
According to the report, citing a lawsuit filed in the U.S. District Court in Washington D.C., the companies named in the lawsuit as defendants included Apple, Google parent company Alphabet, Microsoft, Dell and Tesla.
According to the report, the lawsuit was brought by nonprofit group International Rights Advocates on behalf of 13 anonymous plaintiffs from the Democratic Republic of the Congo.

A majority of the world’s cobalt — coveted for its use in a wide variety of high-tech capacities, included laptops and cellphones — is mined in the Democratic Republic of the Congo, where NGOs have positioned the spotlight on the use of child labor at cobalt mines in the country.
In November 2017, Amnesty International released a report criticizing a number of major U.S. companies for not doing enough to assure their supply chains do not include child labor.
Among the companies listed as having taken no action related to the issue were: Microsoft, Lenovo, Renault, Vodafone, Huawei, L&F, Tianjin B&M, BYD, Coslight, Shenzhan BAK and ZTE.
“Our initial investigations found that cobalt mined by children and adults in horrendous conditions in the DRC is entering the supply chains of some of the world’s biggest brands. When we approached these companies we were alarmed to find out that many were failing to ask basic questions about where their cobalt comes from,” said Seema Joshi, head of business and human rights at Amnesty International, in November 2017.
“Nearly two years on, some of the richest and most powerful companies in the world are still making excuses for not investigating their supply chains. Even those who are investigating are failing to disclose the human rights risks and abuses they find. If companies are in the dark about where their cobalt comes from, so are their customers.”

The GOES MMI, which covers grain-oriented electrical steel, surged 30 points this month for a January reading of 187. 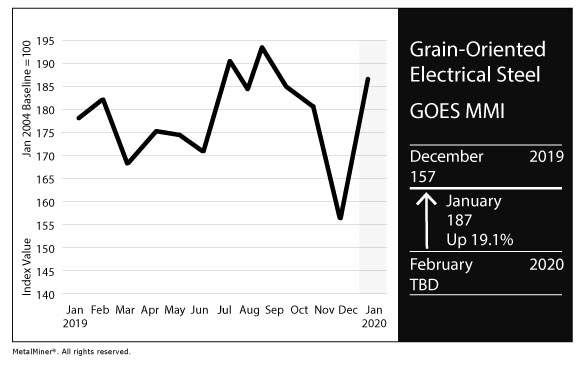 The GOES price rose 18.6% month over month to $2,575/mt as of Jan. 1.
In GOES news, the U.S.’s lone producer of GOES, AK Steel, will be acquired by Cleveland-Cliffs.
“We believe this transaction is a compelling opportunity for AK Steel shareholders to participate in the substantial upside potential of what will be a premier vertically integrated producer of value-added iron ore and steel products with significant scale and diversification,” AK Steel CEO Roger Newport said. “Our shareholders will benefit from exposure to a larger, more diversified company that is better positioned to capitalize on growth opportunities. The combination of Cliffs’ iron ore pellet capabilities and our innovative, high-quality steel product development and production is strategically compelling.”
Last month, we broke down the announced acquisition:

To us, the best rationale for the deal appears on slide 14, outlining AK Steel’s short-term debt position: 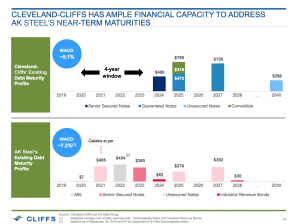 If you buy the notion that Cliffs can swallow AK and convert that company’s debts to its own and save on interest expense, then score one for the deal!

So why would Cliffs buy AK Steel?

A compelling reason appears on slide 11: 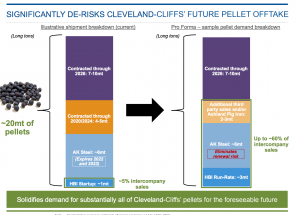