The Construction Monthly Metals Index (MMI) traded flat this month for a February MMI reading of 79. 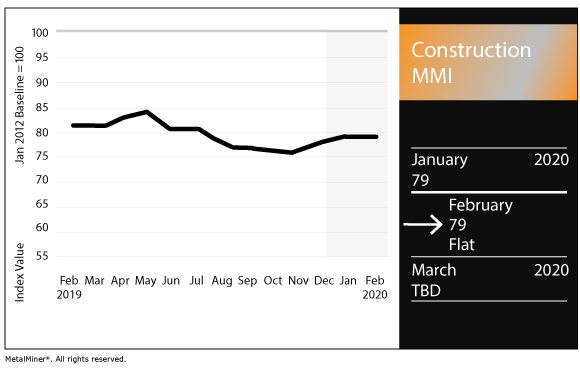 U.S. spending on construction reached a seasonally adjusted annual rate of $1,327.7 billion in December, marking a 0.2% drop from November but a 5.0% increase on a year-over-year basis.

Meanwhile, private construction spending came in at a seasonally adjusted annual rate of $991.2 billion in December, down 0.1% from November.

The Architecture Billings Index (ABI), which is released monthly by the American Institute of Architects and tracks billings growth, closed 2019 on a positive note after having spent most of the year in sideways or contractionary territory.

The ABI checked in at 52.5 in December, with anything greater than 50 indicating billings growth. The December reading marked an increase from November’s 51.9.

“Although the period of declining and flat billings earlier in the year was one of the most protracted since the end of the Great Recession, firms remain cautiously optimistic about business in the coming months,” this month’s ABI report stated. “In addition, backlogs at architecture firms remained strong in December, with firms reporting an average backlog of 6.3 months. Backlogs have extended beyond six months since the spring of 2018.”

This month’s ABI survey asked architecture firms about their marketing spending, to which half indicated no change in spending from 2018 to 2019, while 34% indicated they had increased their spending on marketing.

Privately owned housing starts reached a seasonally adjusted annual rate of 1,608,000 in December, according to the Census Bureau and Department of Housing and Urban Development. 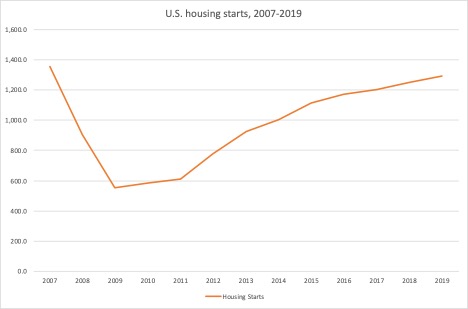 On a year-over-year basis, December starts were up 40.8%.

PREVIOUS POST:
This Morning in Metals: U.S. goods and services deficit hits $48.9B in December
NEXT POST:
India’s annual budget could prove to be a boost to the steel sector