The Raw Steels Monthly Metals Index (MMI) gave up some of last month’s gains with a one-point drop to 71 (following a three-point increase to 72 last month).
Request a 30-minute demo of the MetalMiner Insights platform now. 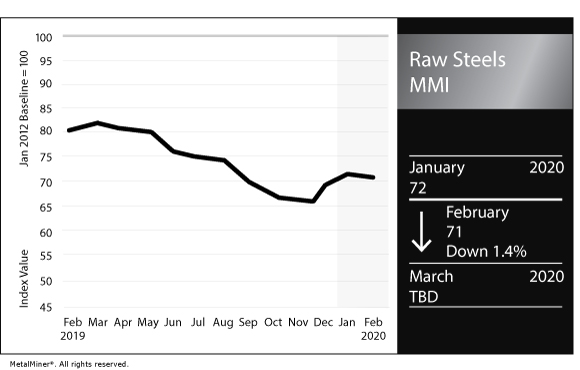 Some stronger signs of improvement in U.S. manufacturing activity, plus reports of increased activity in the housing market, may continue to provide sideways support to U.S. steel prices in the short term.
As noted in the MetalMiner Monthly Outlook (free trial available) released this week for February 2020, the ISM PMI increased to 50.9 for its January activity reading — a 3.1-point increase compared to December — and back in expansionary territory with a value over 50.
Similarly, the IHS Markit U.S. Manufacturing PMI also maintained an expansionary value of 51.7 for January activity; however, this value dropped compared to the previous month’s value of 52.4.

Chinese steel prices generally held steady during most of January.
However, at the end of the month, some prices declined slightly as demand reportedly weakened.


The China Iron and Steel Association (CISA), according to press reports, issued a public statement calling for steel producers to maintain price stability rather than rashly altering prices as demand temporarily slumps in China due to coronavirus-related logistics issues.
On Jan. 11, CISA issued a report forecasting a 2% increase in China’s domestic steel demand this year, with around 890 million tons to be consumed, citing construction, railway and home appliances as areas of demand growth.

In January, President Donald Trump announced Section 232 tariffs at the rate of 25% would be extended to additional derivative steel products on Feb. 8, as explained by MetalMiner’s Fouad Egbaria. Trump cited a need to support higher capacity utilization rates, which have not appeared to satisfactorily stabilize above the critical 80% mark.
Expansion of Section 232 tariffs to cover some steel products could ultimately provide steel price support to upstream U.S. steel producers.