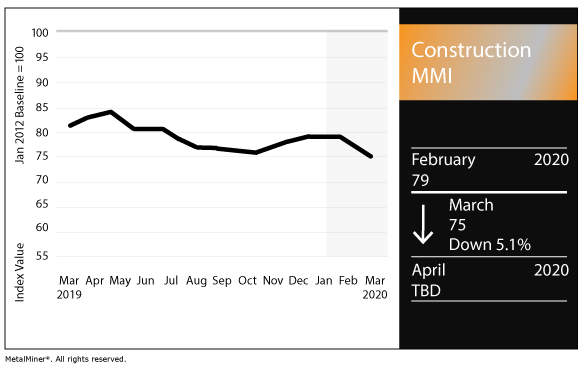 The U.S. Census Bureau is scheduled to release its February spending report April 1.

Meanwhile, according to the Census Bureau and Department of Housing and Urban Development, U.S. housing starts reached a seasonally adjusted annual rate of 1.57 million in January, marking a 3.6% decline from December but a 21.4% increase from January 2019.

Single‐family housing starts reached a rate of 1.01 million, down 5.9% from December, while the rate for units in buildings with five units or more reached 547,000.

Privately owned housing completions reached a rate of 1.28 million in January, down 3.3% from December and up 1.5% from January 2019.

On the heels of the coronavirus outbreak from China and growing concerns about its impact on economic activity, the U.S. Federal Reserve once again opted to cut interest rates.

“The fundamentals of the U.S. economy remain strong,” the Federal Reserve said in a statement released Tuesday. “However, the coronavirus poses evolving risks to economic activity. In light of these risks and in support of achieving its maximum employment and price stability goals, the Federal Open Market Committee decided today to lower the target range for the federal funds rate by 1/2 percentage point, to 1 to 1‑1/4 percent. The Committee is closely monitoring developments and their implications for the economic outlook and will use its tools and act as appropriate to support the economy.”

According to the National Association of Home Builders (NAHB), the act marked the first federal funds rate cut outside of the typical meeting schedule since 2008.

“The Fed’s action was expected, but perhaps not to this degree and timing,” the NAHB said. “And the policy change was consistent with recent declines for interest rates in the bond market. These declines should push mortgage interest rates closer to a low 3% average for the 30-year fixed rate mortgage.

“However, the virus poses supply-side and potential growing demand-side challenges that are not precisely addressed by monetary policy. Fundamentally, this economic situation is one that must be addressed through public health and scientific institutions. The rate cut is supportive, both as a signal and as an insurance move for possible economic softening.”

The Architecture Billings Index (ABI), released monthly by the American Institute of Architects (AIA), recorded a January reading of 52.2 after the previous month’s 52.1 (readings greater than 50 reflect billings growth).

“Architecture firm billings increased for the fifth consecutive month in January, with about the same share of firms reporting an increase in billings as in December,” the AIA said. “Business conditions continue to recover from the soft patch they experienced in the spring and summer of 2019, and firms are becoming more optimistic about future work. In addition, the value of new design contracts was particularly strong in January, as clients began to kick off new projects for the year.”

According to the AIA, January proved to be a strong month for small firms.

“January was also a strong month for small firms in general, with the National Federation of Independent Business’s Small Business Optimism Index reporting one of the strongest readings in its 46-year history,” the AIA said. “Small business owners expect increased sales, higher earnings, and higher employee wages in the near future, despite a continued struggle to find skilled workers.”

According to the Bureau of Labor Statistics (BLS), nonfarm payroll employment rose by 225,000 in January.

Among the sectors seeing notable gains were health care, transportation, warehousing and construction.

The construction sector added 44,000 jobs in January, according to the BLS, up significantly from the 2019 monthly average.

“In January, construction employment rose by 44,000,” the BLS reported. “Most of the gain occurred in specialty trade contractors, with increases in both the residential (+18,000) and nonresidential (+17,000) components. Construction added an average of 12,000 jobs per month in 2019.”

PREVIOUS POST:
This Morning in Metals: Oil prices tick up on OPEC output cut expectations
NEXT POST:
British Steel to live on, with or without the French