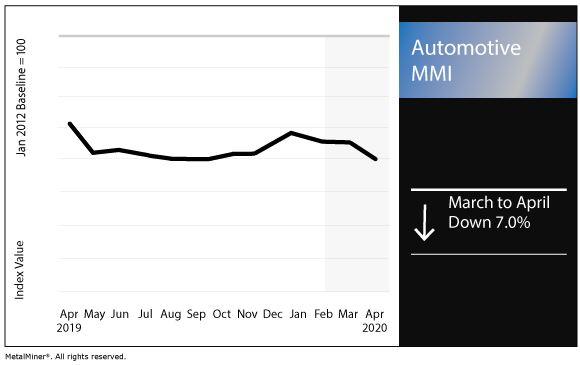 Despite the drop-off in truck sales, Ford said stock levels are “well positioned at the end of Q1 despite plant closures due to the coronavirus outbreak.”

General Motors reported deliveries declined by 7% in the first quarter, down to 618,335 vehicles, citing the coronavirus outbreak’s impact in March.

“In this uncertain and challenging time, GM and our strong network of dealers are here to help, offering concierge service, providing courtesy transportation to customers in need and offering home delivery where permissible,” said Kurt McNeil, U.S. vice president of sales operations.

Toyota Motor North America reported March 2020 sales were down 36.9% on a volume basis and by 31.8% on a daily selling rate basis.

“As a society, we’re all in this together,” said Steven Center, vice president of automobile sales at American Honda. “After a strong start to the year, industry sales are going to suffer in the short term, and we have suspended auto production as part of our effort to carefully manage our business in the face of the steep decline in demand.”

“It goes without saying that the entire world is facing a tremendous challenge that is having a significant impact on business and our normal way of life,” said Randy Parker, vice president of national sales for Hyundai Motor America.

As we reported last month, Detroit’s Big Three announced suspension of production at their North American operations amid the ongoing coronavirus outbreak.

Ford initially said its production suspensions would last until at least March 30. However, given the ramp-up in COVID-19 cases in the U.S., the automaker postponed planned restarts.

“Ford is delaying the restart of production at its North America plants to help protect its workers,” said in a release March 31. “The company had been aiming to restart production April 6 at Hermosillo Assembly Plant and April 14 at several key U.S. plants – and now has further postponed startup dates, which will be announced later.”

Ford said it will restart its Rawsonville plant April 20 in order to produce ventilators.

“Rawsonville Components Plant will restart the week of April 20 to produce the Model A-E ventilator, in collaboration with GE Healthcare, supported by paid volunteer UAW workers,” Ford said. “The Model A-E ventilator is a basic, cost-efficient design that addresses the needs of most COVID-19 patients. Production will quickly scale up to produce 50,000 ventilators by July 4 – helping to meet the growing demand in the U.S.”

Ford noted ventilator production will be the only work done at the Rawsonville Components Plant.

Honda suspended production effective March 23; on Thursday, Honda announced it would extend its U.S. and Canada production suspensions through April 10.

As the coronavirus outbreak has ramped up in the U.S., so has the demand for a wide variety of safety products, from gloves to face masks to ventilators.

To meet the demand, GM launched a “rapid-response project” to produce face masks on March 20. According to GM, it will deliver its first 20,000 face masks April 8.

Once it reaches full capacity, GM expects to be able to produce 1.5 million masks per month (or approximately 50,000 per day).