The world’s steel output declined by 6% in March compared with output in March 2019, the World Steel Association reported in its most recent monthly output report.

Global production in March totaled an estimated 141.1 million tons, according to the World Steel Association.

The decline comes after global growth in February reached 3.3%. 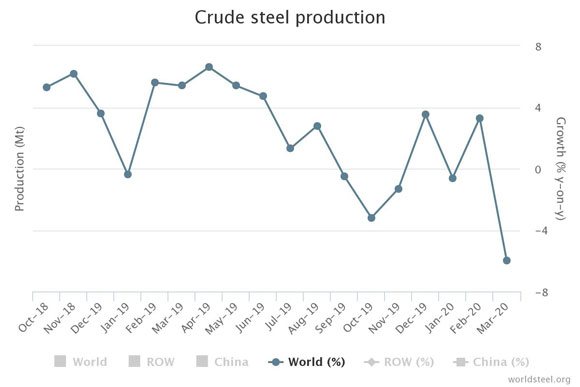 However, the association noted the current uncertainty stemming from the COVID-19 outbreak meant many of the numbers could soon be subject to change.

“Due to the ongoing difficulties presented by the COVID-19 pandemic, many of this month’s figures are estimates from national and regional associations, which may be revised with next month’s production update,” the association said in a release.

In the first quarter, global crude steel production reached 443.0 million tons, down 1.4% compared with the same period in 2019.

China’s production down 1.7% in March

U.S. production reached 7.2 million tons, down 6.0% compared with a year ago.

No. 2 steel producer India churned out an estimated 8.7 million tons of crude steel, marking a 13.9% decrease.

PREVIOUS POST:
The nickel market first experiences a surplus, then supply fears
NEXT POST:
This Morning in Metals: Arconic to resume operations at Tennessee facility