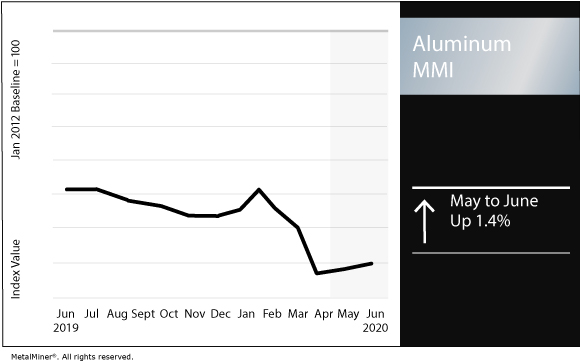 As mentioned last month, the LME price and the SHFE diverged sharply over April.

While investors dumped LME and bought SHFE on the expectation that demand is picking up much faster in China than the rest of the world, Chinese buyers looked overseas. According to Reuters, China’s aluminum imports reached 100,000 tons in May alone.

This may have helped aluminum prices to climb from $1,477.50/mt on May 1 to $1540.00/mt by June 1. The price reached a two-month high June 8. However, the compounding global supply market surplus will eventually weigh on prices if a significant improvement in demand does not become evident. As the Financial Times reported, global aluminum inventories could reach up to 16 million metric tons by the end of the year.

Throughout May, Rusal, the largest non-Chinese aluminium producer, saw a return of 20% to 30% of its usual aluminum demand. Roman Andryushin, Rusal’s head of sales and marketing, said: “I hope that the second quarter will remain the worst this year … It means that the third and fourth quarters are going to be better. But until we see real significant improvements, it’s hard to definitively estimate the extent of the decline (in demand).”

Rusal largest consumers are the automotive and aviation industries, which were hit particularly hard by the coronavirus crisis. Approximately 50% of Rusal’s sales are to the European market, which they expect to improve in the upcoming months.

Last month we reported U.S. producer Alcoa announced it would curtail its Intalco smelter capacity following a net loss of $24 million in the first quarter of 2020.

The curtail was scheduled for July; however, due to the previously mentioned performance struggles, Alcoa began the layoffs in early June.

According to the Seattle Times, the company’s goal is to cut employment down to 25-30 people at the plant by August.

USMCA comes into effect in July

Most of the agreement was confirmed in December 2019. However, in the last week of May an amendment was included.

In this newest addition, not only raw material but also vehicle components must initially meet a 60% regional metal content, which will eventually increase up to 70% in order to qualify for tariff-free trade.

According to the Mexican heavy vehicle makers’ association ANPACT, this new addition to the USMCA will negatively impact Mexican automakers, which might opt to pay the tariff instead of the hefty cost of reorganizing their supply chain.