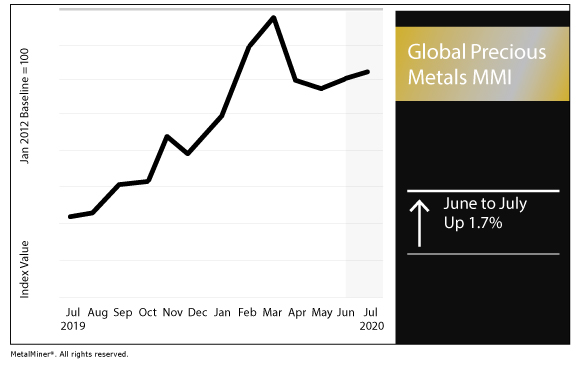 The safe-haven asset has seen its price rise to a nearly nine-year high, closing at $1,810/ounce on Wednesday, its highest since September 2011.

Meanwhile, the U.S. dollar, which is typically inversely correlated with gold prices, has lost some steam, falling to 96.45 on Wednesday.

Meanwhile, the spread between platinum and palladium grew this past month, with palladium rising to $1,873/ounce and platinum at $819/ounce.

The palladium price rose from $1,860 at the start of June while platinum ticked down from $822/ounce.

However, it’s been a downward few months for palladium, which has seen its price take a tumble amid declining automotive demand.

From March 1 to July 1, the palladium price has declined 25%. However, with automotive demand showing tentative signs of a recovery in the U.S. — in addition to two straight months of year-over-year sales increases in China — the palladium price could get a boost.

“The Company took the decision to temporarily close the ACP Phase B unit to secure a safe operating environment, protect employees and protect the integrity of the plant,” Anglo said in a release.

“The detailed technical investigation into the cause of the water leak shows localised damage to a single cooler tube that is now being replaced and confirms that this leak is unconnected to the repair work recently completed on the ACP Phase B unit. Other maintenance is being carried out and additional controls put in place whilst the ACP Phase B unit is off-line in order to provide greater operational stability. The repair work is expected to be completed next week, and recommissioning will then start once a detailed risk-based assurance process has confirmed it is safe to do so.”

However, the firm said the repairs would not impact previous PGM output guidance.

“The stoppage of the ACP Phase B for repairs of this water leak is not expected to have any impact on full year refined production guidance, which remains at between 3.1 – 3.6 million PGM ounces,” Anglo said.