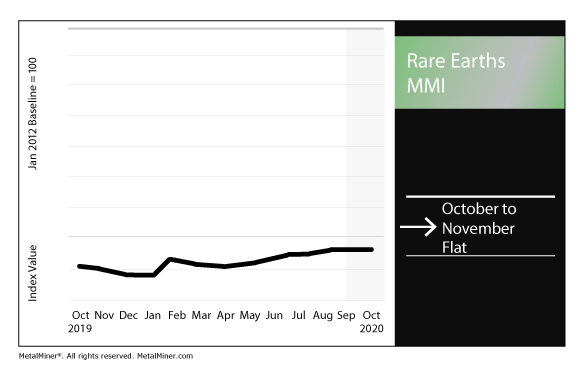 China’s legislature last month approved a new export control law that will go into effect Dec. 1, the state-run Xinhua news agency reported last month.
“China may take countermeasures against any country or region that abuses export-control measures and poses a threat to China’s national security and interests, according to the law,” Xinhua reported.
“The law also clarifies that technical documentation related to the items covered by the law is also subject to export-control stipulations.”
The law could impact exports of rare earths, for which China overwhelmingly dominates the global market.
As we have noted in this column before, the U.S. — especially the Pentagon — has long sought to diversify its rare earths supply chain. The U.S. earlier this year approved Phase 1 contracts with MP Materials and Lynas Corporation for work to develop rare earths separation facilities in the U.S.

Continuing the theme of various countries’ efforts to wean themselves off of rare earths dependence on China, Forbes recently reported on a joint venture between South Korea and Australia that has showed some promise.
The joint mineral processing project, Forbes notes, has so far produced neodymium and praseodymium. The two elements are used in permanent magnets in electric vehicles and, for praseodymium, renewable energy apparatus, like wind turbines.

In addition to the aforementioned China export control law, Chinese executives in the rare earths sector argue state-mandated limits on production are hurting both producers and end users, the Financial Times reported.
One executive cited by the Financial Times under condition of anonymity said production quotas are hurting their company financially. In addition, the unnamed executive said the quotas lead to “unstable supply” that puts stress on end users.