The Raw Steels Monthly Metals Index (MMI) rose by 7.8% for this month’s reading, as steel prices continued to rise. 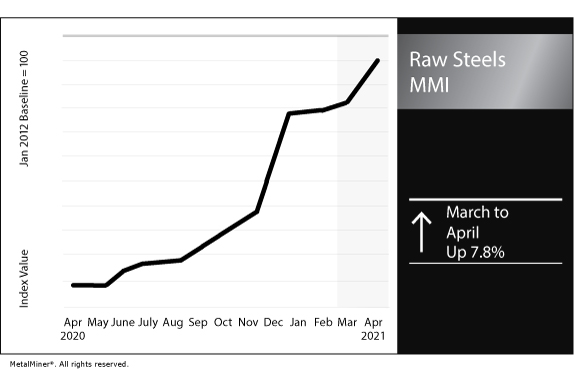 As we’ve chronicled in this monthly column, steel prices have been rising consistently since last summer.

Buyers have struggled to find supply in what eventually became an allocation market.

Steel prices have posted double-digit percentage gains on a month-over-month basis. However, that ascent appears to be slowing somewhat.

The US hot rolled coil price, for example, continued to increase. The US HRC three-month price rose 20% month over month to $1,280 per short ton. However, the price has flattened out thus far in April.

Are steel prices finally reaching a peak? That is not yet clear, but price gains have certainly started to slow.

Speaking of allocation markets and tight supply, buyers will take some solace in the fact that some new supply will be coming on stream, both in the short and medium terms.

Work continues on Steel Dynamics’ new Sinton, Texas facility, which is scheduled to open by mid-year.

Excluding costs associated with investment in the Sinton flat rolled steel mill ($18 million), the company said it expected its first quarter earnings to be in the range of between $1.94 and $1.98 per diluted share, which it said could represent a record earnings quarter for the company.

The first quarter proved to be a strong one, with performance buoyed by elevated steel prices.

Nucor will invest approximately $164 million toward the new mill, which it said will be operational by 2023.

The Chinese city of Tangshan, a steelmaking hub, has taken steps to curb steel production in an effort to limit pollution.

Chinese steel prices, meanwhile, appeared stronger this past month than their US counterparts.

After falling to around $750 per metric ton in mid-March, the China HRC price surged to $820 by April 1.

A number of domestic groups have contested former President Donald Trump’s Section 232 steel and aluminum tariffs in the court system.

To date, those challenges have been largely unsuccessful.

However, a recent challenge of Trump’s expansion of the tariffs — covering steel and aluminum derivatives — proved successful for the domestic petitioner.

The United States Court of International Trade ruled in favor of the PrimeSource on one count.