The Stainless Monthly Metals Index (MMI) increased by 7.0% for this month’s reading, as the ATI strike entered its seventh week this week. 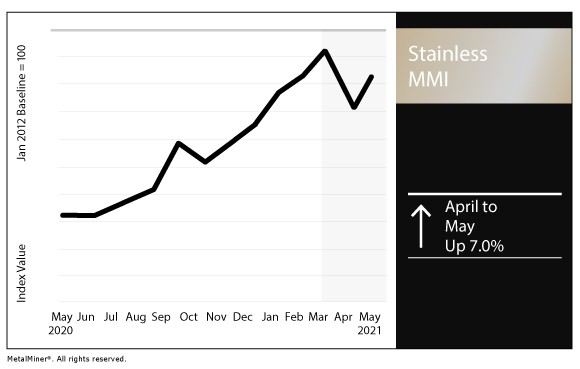 In late March, the United Steelworkers union announced a strike at nine Allegheny Technologies Inc. (ATI) facilities. The union cited “unfair labor practices” in its announcement of the strike.

Over six weeks later, the labor stoppage has yet to reach a conclusion.

Meanwhile, late last month, ATI reported its first-quarter financial results. The firm reported a net loss of $7.9 million for the quarter, compared with a net loss of $1.1 billion in Q4 2020.

In its earnings report, the firm expressed “disappointment” in the union’s decision to strike.

“While we are incredibly disappointed that the USW leadership decided to strike our Specialty Rolled Products locations beginning in late March, we remain committed to our business continuity plan to safely operate in a way that allows us to deliver to our customers on our quantity and quality commitments during this strike,” President and CEO Robert S. Wetherbee said. “Our operating teams are committed to minimizing the operational interruption and financial impact from the strike as we seek to reach a fair and equitable settlement with our striking workers.”

Meanwhile, in a bargaining update released Thursday, May 13, the union said it had not heard back from ATI management regarding a proposal it made May 6.

“The issue of profit sharing has been a subject of discussion throughout our negotiations with ATI,” USW said in the statement. “We have shown the company that we are willing to be flexible, but the current offer by ATI eliminates profit sharing and replaces it with 3% wage increases in the 2nd, 3rd and 4th years of the contract. After going without a wage increase since 2014, obviously such an offer is unacceptable.”

During the 30-minute webinar, titled “Turning Stainless Market Upheaval to Your Advantage,” the MetalMiner team broke down the current market — from shortages and long lead times to the impact of the ATI strike.

“I’ve never seen a market like I’ve seen this year, in the sense that mill capacities are incredibly strict with the allocations,” Olsen said. … “Right now we’re in a US stainless market where allocation is on the horizon, at least until the end of the year.”

So, how did the market get to this point?

In simple terms, demand increased and supply decreased, she explained.

ATI’s announcement in December that it would exit the commodity stainless market by mid-2021 created a “duopoly,” she added, in the sense that buyers then would have to go to either North American Stainless or Outokumpu. Meanwhile, the ATI strike has put further pressure on NAS and Outokumpu to supply the market.

In addition, there has been a divergence in terms of price announcements, contrary to the typical stainless market model, in which a market leader sets the tone on prices and other mills follow suit.

“Now the market leader is North American Stainless, but Outokumpu also has a lot of capacity,” Olsen added. “So it’s really become a duopoly where NAS and Outokumpu do have diverging strategies.”

Those interested in viewing the full webinar video on demand can visit the MetalMiner Video Archive.

It reduced the surcharge to 25% for stainless flat and long products.

“The surcharge rate is considered the maximum level for May and will be reviewed monthly,” NAS said.

While nickel’s use as a battery component is growing, a majority of global nickel production still goes into stainless steel.

The LME nickel price proceeded to trade sideways through March and the first three weeks of April. Since then, however, nickel has shown upward momentum, like other metals.