The Automotive Monthly Metals Index (MMI) slipped by 0.7% for this month’s index reading, as U.S. auto sales surged in June and Q2. 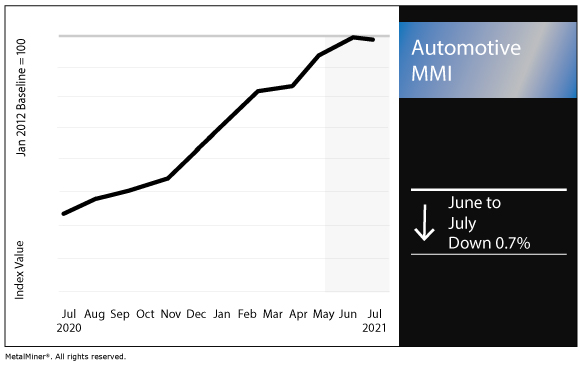 Among the top automakers, General Motors reported its Q2 sales in the U.S. market jumped by 40% year over year.

The automaker touted continued robust demand but also noted the ongoing strain on supply stemming from the global semiconductor shortage.

“The U.S. economy is accelerating, consumer spending is robust and jobs are plentiful,” said Elaine Buckberg, GM chief economist. “Consumer demand for vehicles is also strong, but constrained by very tight inventories. We expect continued high demand in the second half of this year and into 2022.”

Ford’s electric vehicle sales rose by 117% in June. Furthermore, illustrative of strong demand and constrained supply, Ford said average transaction prices are up by $6,400 from a year ago to $47,800.

FCA US reported Q2 sales jumped by 27% year over year.

“The recovering U.S. economy and continued strong demand for our products drove unprecedented results,” U.S. Head of Sales Jeff Kommor said. “We continue to work closely with our suppliers to mitigate the manufacturing impacts caused by the various supply chain issues facing our industry.”

Honda, meanwhile, reported a 65.7% surge year over year in its Q2 sales. The automaker also posted a 33.4% year-over-year jump in June.

“Based on strong product inventories, Honda completed the best four-month sales run in its history, including a new 2nd quarter sales record,” Honda said in its sales report. “Fueled primarily by record truck sales, cars also contributed with Civic and Accord completing a strong 2nd quarter, combining for over 53,000 sales in June.”

According to a forecast from J.D. Power and LMC Automotive, new-vehicle retail sales were projected to rise by 12.4% year over year in June.

Meanwhile, they projected new-vehicle retail sales to rise by 0.3% compared with June 2019 sales.

“June is set to top off a blistering first half of 2021 with multiple year-to-date performance records,” said Thomas King, president of the data and analytics division at J.D. Power. “On a volume basis, June 2021 year-to-date retail sales are trending to just above 7.1 million units, the best first half of any year on record. Records will also be set for average transaction price, total consumer spending on new vehicles and retailer profitability.”

Meanwhile, according to the most recently available data from the China Association of Automobile Manufacturers, Chinese auto sales fell by 3.1% year over year in May.

Furthermore, sales declined by 5.5% from the previous month.

Meanwhile, earlier this month, General Motors announced it will source “U.S.-based lithium” through a collaboration with Controlled Thermal Resources. Through the collaboration, the automaker said it aims to secure “local and low-cost lithium.”

“This lithium will be produced through a closed-loop, direct extraction process that results in a smaller physical footprint, no production tailing and lower carbon dioxide emissions when compared to traditional processes like pit mining or evaporation ponds,” GM said.

Lithium is a critical component in electric vehicle batteries. As the automotive industry continues its incremental electrification process, lithium demand will continue to grow.

According to the United States Geological Survey’s January 2021 lithium commodity summary, the only lithium production in the U.S. comes from a brine operation in Nevada. Over 70% of global lithium goes into battery production.