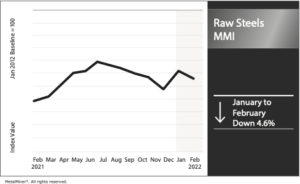 The U.S. and Japan reached an agreement regarding steel imports from Section 232 tariffs. Announced Feb. 7, the new deal will follow a similar tariff rate quota (TRQ) structure to the one established between the EU and U.S. Unlike the EU TRQ, however, aluminum will remain excluded. The quota remains well below the 3.3 million tons of steel annually permitted for the EU to the U.S.

Beginning April 1, as much as 1.25 million metric tons of steel can come tariff-free from Japan annually. The U.S. and Japan will continue to combat excess global steel capacity, namely from China. According to a joint statement, Japan will implement “appropriate domestic measures, such as antidumping, countervailing duty, and safeguard measures or other measures of at least equivalent effect” as part of the agreement. According to preliminary data, U.S steel imports of Japanese material reached roughly 989,000 metric tons in 2021.

Meanwhile, negotiations between the U.S. and the U.K. continue. Unlike Japan, the U.K. imposed retaliatory tariffs on U.S. goods including whiskey, motorcycles, and jeans. South Korea also requested revisions to the tariffs. However, official negotiations have yet to begin.

Meanwhile, Nucor plans to expand production at its Crawfordsville, Indiana sheet mill. Nucor will fund the expansion with a $290 million investment. Once started, construction will take around two years to complete. Nucor will expand “existing galvanizing and prepaint capabilities.” At completion, the construction grade continuous galvanizing line will boast an annual capacity of 300,000 tons. The prepaint line will reach 250,000 tons per year. The start of construction pends regulatory and permit approvals. Nucor’s announcement follows the gradual restart of its Gallatin County, Kentucky plant. The mill went offline late last year to integrate a new electric arc furnace. The mill will reach its full annual capacity of 3 million short tons in 2023.

By 2025, China expects more than 80% of national steel capacity to meet low-emissions targets. In addition, the country expects to collect more than 300 million tons of steel scrap per year. The advancement to scrap demand will feed increased production from electric arc furnaces (EAFs), projected to account for more than 15% of crude steel output by 2025. In 2020, EAFs represented roughly 10% of total steel production.