The Global Precious Monthly Metals Index (MMI) fell by 1.4% for this month’s index reading, as gold prices retraced after peaking in early March. 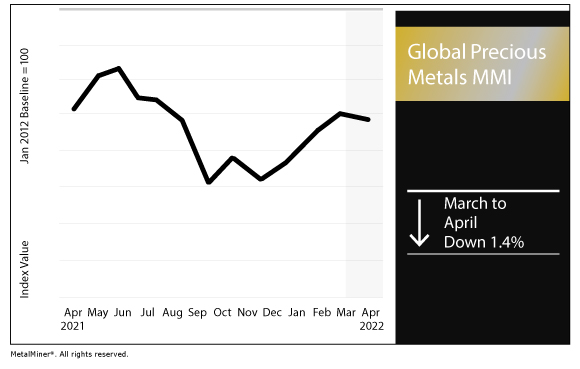 After peaking in early March, gold prices have retraced. 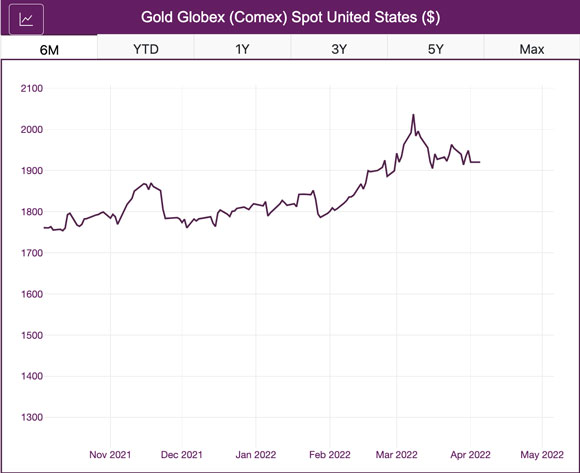 As we noted last month, COMEX announced it would suspend six Russian gold and silver producers.

“Russia is a significant gold producer but still in single-digit percentages globally,” MetalMiner’s Stuart Burns explained last month. “Much more significant is palladium, where they produce 40% of global supply, and platinum, which is less but still very significant. The implications for the catalyst markets are real.”

Since the March peak, prices retraced down to around $1,920 per ounce early this week.

Meanwhile, silver prices peaked at $26.40 per ounce in March. Since then, they retraced down to $24.54 per ounce earlier this week.

Elsewhere in the precious metals basket, palladium prices have also come back down after surging earlier in March.

Contrary to the aforementioned gold and silver, Russia accounts for approximately 40% of global palladium mine production. Palladium (and platinum) is used in automotive catalytic convertors. As such, while gold is typically a hedge of choice for investors of all types, palladium has a specific industrial use in the automotive sector.

“For the past couple of decades companies have been implementing practices to reduce inventory across the supply chain, setting a level of safety stock to buffer normal demand and supply variability,” Deloitte said in the March 25 report. “COVID-19 was a wake-up call that these traditional inventory buffers are insufficient when a crisis hits. Establishing a policy for ‘strategic stock’ of critical materials should be an essential component of a company’s overall inventory policy.”

In that vein, Deloitte zeroed in on semiconductors.

“For example, the largest companies in the semiconductor industry had increased stockpiles of palladium and neon, two critical elements in semiconductor production that are highly reliant on supply sources in Russia,” the report added. “Unfortunately, many companies had not anticipated these supply-side risks and are now exposed with lean, and potentially insufficient, inventory to manage through a prolonged period of disruption.”

As always, buyers should familiarize themselves with the five best metal sourcing practices.

The U.S. dollar index spent most of February in the 95-97 range, according to Trading Economics data.

In March, however, the index jumped to over 99. After retracing slightly late in the month, the dollar index has picked back up in early April. The dollar index reached nearly 99.50 this week.

As the MetalMiner team continues to note in the weekly newsletter, the Federal Reserve could be set to implement a more aggressive interest rate policy in the months ahead.

“In addition, the ‘inverted yield curve’ suggests that investors think the rate hikes will be more aggressive to stem inflation faster,” the MetalMiner team explained in this week’s newsletter. “As rates increase quickly consumer spending typically stalls quickly, as intended. This can also lead to a recession as the pendulum swings the other way. An inverted yield curve has preceded every recession since the 1950s.”

As the Fed plays the balancing act of mitigating inflation while also not denting demand unduly, market watchers should continue to keep tabs on developments vis-a-vis prospective rate hikes.