It was another busy month in the world of metals.

Then again, these days quiet months in metals or in trade, generally, are few and far between. 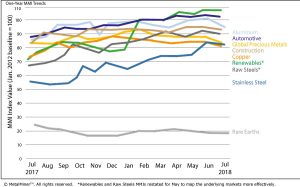 Meanwhile, a Section 232 investigation focusing on imports of automobiles and automotive components is unfolding. More than 2,300 public comments were submitted as part of the U.S. Department of Commerce’s review process, and public hearings are scheduled for next week.

Meanwhile, in metals markets, most base metals were down last month, with steel being the exception.

A few highlights from this month’s round of Monthly Metal Index (MMI) reports:

Read about all of the above and much more by downloading the July MMI report below.