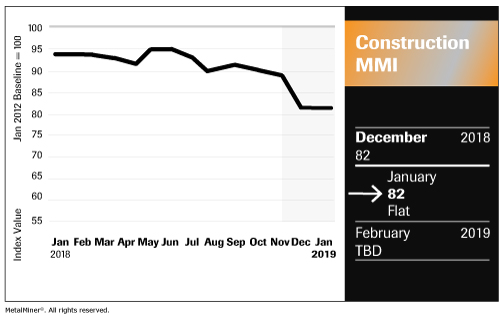 Our Construction MMI sub-index — tracking a basket of industrial metals, materials and other indicators crucial to the construction sector — stayed at a value of 82, holding steady from December’s reading.

The constituent metal and material price changes, like the overall reading, held relatively steady over the month. Tracked by our MetalMiner IndX, the U.S. shredded scrap price dropped only a few dollars this month ending up at $353 per short ton, while the China H-beam steel price lost about the same ground per metric ton. Chinese rebar, on the other hand, rose by about $12, reaching nearly $557 per metric ton.

Perhaps the biggest story of the moment — the U.S. government shutdown, a result of the stalemate between President Donald Trump and Congressional Democrats — turns out to have a construction angle, as well as a direct effect on construction-sector data delays.

The sticking point keeping President Trump from capitulating to re-opening government business is his steadfast demand for about $5 billion in funding for the U.S.-Mexico border wall that he promised during his campaign. First indicated to be constructed of concrete, Trump has since pivoted to a steel-slat design, and most recently, a setup of “see-through” materials.

All of which is to say, the U.S. Census Bureau, which reports the monthly construction spending data, is not reporting updates during the shutdown. We will update this story, or publish a separate post, with the January data when it becomes available.

The next ABI reading is scheduled to arrive on January 23, but the last available numbers from November indicate growth and confidence in the sector.

Billings increased to a reading of healthy 54.7 in November — the highest since last January — up from 50.4 the previous month. (A reading over 50, like the ISM PMI, indicates positive expansion.)

Industry folks also voiced their top business concerns for 2019 to the AIA via a survey.

“The largest share (30 percent) reported that identifying new qualified staff with appropriate technical and project management skills was one of their top three concerns for 2019, surpassing concerns about firm profitability for the first time in three years,” according to the November ABI release page. “Increasing firm profitability was still selected as one of the top concerns by the second largest share of respondents (26 percent) but that share was well below the 31 percent that selected it as a top concern last year.”

“Coping with an unpredictable economy had the largest increase from 2018 to 2019: 25 percent of firm leaders reported it as a top concern for 2019, compared to just 15 percent that reported the same for 2018,” according to the release.

About That Economy…China May Have Something to Say About That

“The slump in China’s Purchasing Managers’ Index (PMI) is likely to prove an unwelcome New Year’s gift to the world’s major exporters of bulk commodities such as iron ore and coal,” according to Reuters’ daily newsletter, referring to a column by Clyde Russell. “The manufacturing gauge compiled by Beijing’s National Bureau of Statistics dropped to 49.4 in December, dropping below the 50-level that demarcates growth from contraction, for the first time since July 2016.”

The Caixin Manufacturing PMI also dropped on the month, leading to worries over consumption slowdowns in China.