The Automotive Monthly Metals Index (MMI) fell 3.2% to a value of 92 this month, its lowest level in 17 months. 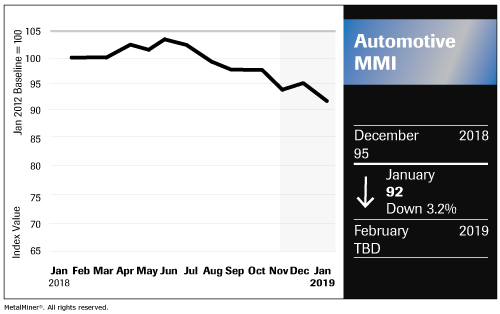 After riding high during mid-2017, above the baseline of 100, the Automotive MMI sub-index — tracking a basket of industrial metals and materials crucial to the automotive sector — has been in a continued overall downtrend since mid-summer of last year.

With both the commodities and base metals sectors ending 2018 on sustained downtrends, and a weak U.S. dollar, there don’t appear to be any immediate signs of the Auto MMI’s slide letting up.

The sub-index’s overall descent, however, hasn’t stopped palladium’s scorching rise. Platinum’s ‘little brother’ is in a solid two-month uptrend, beginning the new year at $1,252 per ounce, by far the best single-metal performer.

All other constituent price points that comprise the Automotive MMI — including U.S. HDG steel, LME copper, and the Korea price of 5052 coil premium over 1050 aluminum — fell over the past month.

G.M. recently named Mark Reuss, the company’s former “product development guru,” as its new president, but that was couched in a near-simultaneous release of Q4 2018 sales figures — which weren’t great, according to an article in Industry Week.

The U.S. automaker announced that fourth quarter sales were down 2.7% from the same time last year, the article stated. Ford and Toyota also lost ground in December, while Fiat Chrysler posted a double-digit percentage gain for last month.

Overall, preliminary expectations put the overall 2018 U.S auto sales number at about 17.2 million vehicles, according to the WSJ (paywall), which would be about even with 2017’s total and “marks the fourth straight year of at least 17 million vehicles sold, a resilient showing for an industry prone to boom-and-bust cycles.”

However, in China, the latest available data show that “a total of 2.55 million vehicles were sold in November, down 13.9 percent year-on-year, according to the China Association of Automobile Manufacturers (CAAM),” cited in China Daily — which, as Reuters reported, is the steepest plunge since 2012.

Automotive Demand Outlook: 2019 and Beyond

So where does this leave the future of automotive demand?

Certain industry watchers, such as former Reuters European automotive correspondent Neil Winton, expect 2019 to be the year that the growing interest and investment in the EV market squeeze traditional automakers and the sales of their product.

Writing in Forbes, Winton notes that Morgan Stanley “expects global auto sales to slip 0.3% in 2019 to 82.1 million. The Center for Automotive Research in Duisberg-Essen, Germany, puts 2019 sales slightly higher at 82.9 million. Fitch Solutions does still expect some growth in sales – a [minuscule] 2.0%.”

However, the tiny slips could give way to bigger sea changes down the line. The days of healthy profitability for the makers of traditional gas-powered cars are numbered, he writes. “Demand for autos is at a dangerous tipping point, according to Morgan Stanley, as buyers put off purchases waiting for the new technology in the form of electric cars to take the stage,” writes Winton.