The February Aluminum Monthly Metals Index (MMI) edged up this month by 1.2% for an index value of 86. The index increased one point from January’s reading and has remained near the low last seen in February 2017, when the index hit a value of 84. 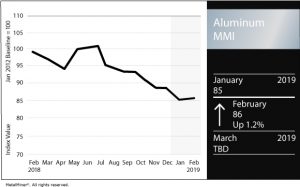 LME aluminum prices trended upward at the start of January but lost some momentum and are moving sideways to start February. Prices continued to show weakness by failing to breach the price resistance point of $1,970 during January (the support price for most of 2018).

With only a weak uptrend followed by some sideways movement, prices have grown weaker at $1,783/mt this month. The politics of trade and financial uncertainty in China, rather than supply and demand in the aluminum market, continue to direct LME price levels into early 2019. 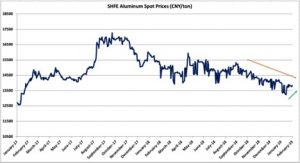 Typically, SHFE prices move similarly to LME prices, but with a lag.

As January played out, SHFE prices stayed weaker — within the pricing trendlines identified by MetalMiner in the January MMI report — with clear sideways movement, especially during the second half of the month.

The European Premium fell from $150/ton to $60/ton, attributed to the removal of sanctions on Rusal. Japanese Q1 aluminum premiums also dropped significantly (by 17-19%).

The U.S. lifted sanctions on aluminum giant Rusal on Jan. 27 following the company’s compliance with the removal of the Russian oligarch Oleg Deripaska — along with several other influential Russians, identified due to their ties with Russian President Vladimir Putin — from its board and parent company En+.

Given that Section 232 tariffs on imports of aluminum remain in place, this should limit ingot price decreases from the removal of sanctions on Rusal; this could be bearish for ingot prices.

But that does not explain what is happening in the commercial alloy/semi-finished market.

Due to the increased use of flat-rolled aluminum in the automotive industry, supplies of the semi-finished metal have grown tight in the U.S. marketplace. The usage of aluminum in vehicles will likely continue to increase due to the need for automakers to adapt to 2025 Corporate Average Fuel Economy (CAFE) fuel economy standards. Some additional vehicle lines, especially those with greater sales volume, could convert to aluminum “white bodies.” For 2018, the Ford Expedition and Lincoln Navigator now also use aluminum bodies.

To give some sense of what this means in terms of aluminum usage, a single Ford F150 truck uses an estimated 676.3 pounds of aluminum per vehicle. With sales of 909,330 units in 2018, that translates to around 608 million pounds of aluminum sheet. Add in the two additional models (the Ford Expedition and the Lincoln Navigator) and it’s easy to see why flat-rolled tightness exists.

Aluminum prices are trending slightly upward this year; however, at this time, prices are in a short-term sideways trend. Tariffs and supply concerns linger and should continue to support prices.

Only the MetalMiner Monthly Outlook provides a continual snapshot to aid buying organizations with the pricing data that can help determine when and how much of the underlying metal to buy.

LME aluminum prices rose during January, but the uptrend lost steam as the month played out. LME primary 3-month prices ended the month at $1904/mt, around 3% higher than December’s closing price of $1,846/mt.

SHFE aluminum prices continued to fall overall, with sideways movement during the second half of January.

Korean commercial grade 1050 sheet continues to decline at a slower rate, ending about 0.91% lower at the end of January. The Indian cash price increased 3.78% from $1.85 to $1.92, retracing some of the price decrease of 6.6% reported last month.