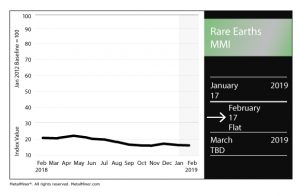 A Canadian company and an Australian company are joining forces on a rare earth elements project in Canada’s Northwest Territories.

In late January, Canadian firm Avalon Advanced Materials announced plans to work with Australian firm Cheetah Resources “to participate in the development of the rare earth resources on its mining leases collectively comprising the Nechalacho Project at Thor Lake near Yellowknife” in Canada’s Northwest Territories.

“We are delighted to have attracted a like-minded partner in Cheetah to the rare earth opportunity at Thor Lake,” Avalon President and CEO Don Bubar said. “The agreement structure will allow Avalon to resume its long term development aspirations for the Nechalacho Project, and secure a source of non-dilutive working capital to continue to advance our other near term development aspirations for the East Kemptville Tin and Separation Rapids Lithium Projects.”

According to the Avalon announcement, Cheetah focuses primarily on the small-scale development of rare earth resources enriched in magnet rare earths, like neodymium and praseodymium.

Of note via-a-vis rare earth minerals is the fact that Daimler is also considering an alliance on electric vehicle batteries, according to the report.

Minerals like cobalt are often found in areas of the world that lead to ethically compromised supply chains. For example, a majority of the world’s cobalt is mined in the Democratic Republic of the Congo, where there are numerous documentation from NGOs and news media regarding the use of child labor, low wages for miners and poorly regulated working conditions that are often extremely dangerous.

Per the Reuters report, Stark, however, said there are no “formal decisions” with respect to such a battery alliance.

PREVIOUS POST:
Aluminum MMI: MMI Flat Despite Semi-Finished Price Increases
NEXT POST:
This Morning in Metals: Copper Ticks Up, the State of the Union and Nippon Results