Taking a Closer Look at the Platinum-Palladium Price Spread

In spite of their status as precious metals, the automotive industry accounts for a high percentage of platinum and palladium demand annually, making the pair essentially industrial metals.

Given that a high percentage of demand generated from the automotive industry relates to the use of the metals within the catalytic converter, as the automotive market moves more fully toward electric powered vehicles, demand will likely decline for both metals.

Meanwhile, according to Reuters, even though palladium- and platinum-heavy fuel cell technology in the electric car market is on the rise, the growth in this area is unlikely to offset falling autocatalyst demand.

Given that prices for palladium soared of late, let’s take another look at palladium price trends, along with its close substitute platinum.

Given that metals and the dollar index (DXY) tend to move in opposite directions, we can see that palladium prices gained quite a bit more value than expected when looking at the DXY trend line against the palladium trend line in light blue below. 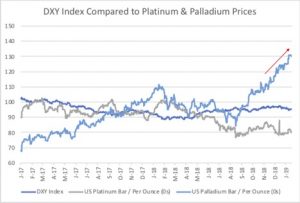 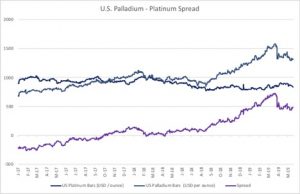 Looking at the price difference in the U.S. between the two metals, or spread, as shown by the purple line in the chart above, we see that the spread between the two flip-flopped in late 2017 to early 2018. The spread surged since last year, hitting a peak around March 1, 2019. More recently, the spread has moved sideways at around $500 per ounce.

Given that China consumes a high percentage of palladium, we could expect that Chinese prices lead U.S. prices. 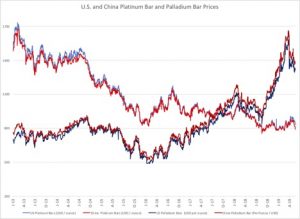 More recently, U.S. and Chinese platinum prices continued to move in a tight band together.

Chinese palladium prices, on the other hand, trend above U.S. prices, with the gap growing in 2019 – not surprising given that China leads demand for the metal globally. 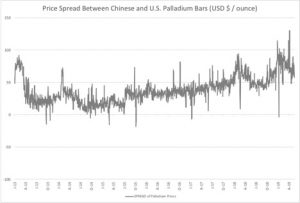 The zero line in the chart above indicates where the two countries’ prices are equal. At points above zero, the Chinese price is higher. The price difference tended to amount to U.S. $25-$50 per ounce, but increased into 2018. During the past few months, the difference decreased again slightly, but still looks somewhat high historically. 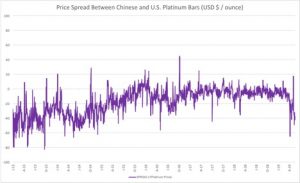 The spread between U.S. and Chinese platinum prices tends to lean toward the U.S. having the higher price. However, since 2016, the prices trended very close together. U.S. prices started to look relatively more expensive again in 2019.

What This Means for Industrial Metal Buyers

For industrial metal buyers looking to track palladium prices, the Chinese price offers a solid proxy of what we might expect with regard to the future behavior of palladium prices.

Platinum prices, however, remain somewhat low historically. The recent performance against the DXY does not necessarily suggest the metal is undervalued. However, given that platinum can serve as a substitute, it’s doubtful the price will stay suppressed long term, as high palladium prices will drive a push toward substitution.