The Global Precious Monthly Metals Index (MMI) picked up one point this month for an August MMI reading of 102. 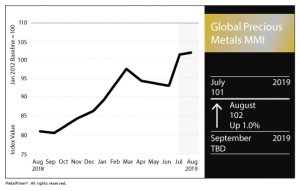 Amid the latest jolt of trade uncertainty — namely, President Donald Trump’s intention to impose a 10% tariff on an additional $300 billion in Chinese goods — safe-haven metals prices have increased.

Gold, for example, last week moved over $1,500 per ounce for the first time in six years, Reuters reported, while silver prices have also gained momentum.

“June was a big month for gold,” said Alistair Hewitt, head of market intelligence for the World Gold Council. “The price broke out of a multi-year trading range to hit a six-and-a-half year high and gold-backed ETF assets-under-management grew by 15% – the largest monthly increase since 2012. While the Fed’s dovish turn was a key driver for this, it also builds on a strong H1 which saw gold demand hit a three-year high, underpinned by extremely strong central bank buying. But we also saw an uptick in sales at an individual level as investors took advantage of June’s price rally to lock-in profits; jewellery recycling and retail bar and coin liquidations both rose.”

Meanwhile, silver — which had been a bit undervalued — posted its largest daily increase in over three years last week, bringing silver above the $17 per ounce mark.

The palladium price retraced this past month while platinum picked up, narrowing the spread that has built up over the last over a year and a half.

However, that narrowing could be a blip on the radar in terms of performance throughout the rest of the year.

According to a Reuters poll, palladium’s premium over platinum is expected to hit an average of $609 per ounce this year and $595 per ounce next year.