The Renewables Monthly Metals Index (MMI) fell four points this month for an August reading of 101. 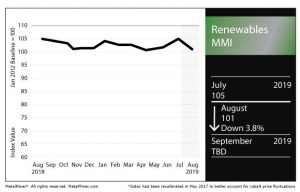 As covered by MetalMiner’s Stuart Burns, Glencore announced it would halt production by the end of the year at the world’s largest cobalt mine: Glencore’s Mutanda operation in the Democratic Republic of the Congo (DRC).

Last week, the miner reported its adjusted EBITDA for the first half of the year came in at $5.6 billion, down 32% on a year-over-year basis, with CEO Ivan Glasenberg citing “a challenging economic backdrop.”

Among the challenges has been a plummeting cobalt price. As a result, the miner announced it will move toward pausing production at its Mutanda copper and cobalt mine.

“However, our African copper business did not meet expected operational performance,” Glasenberg said. “We have moved to address the challenges at Katanga and Mopani with several management changes as well as overseeing a detailed operational review, targeting multiple improvements to achieve consistent, cost-efficient production at design capacity.

“Our teams have identified a credible roadmap towards delivering on the significant cashflow generation potential of these assets, at targeted steady state production levels. At Mutanda, we are planning to transition the operation to temporary care and maintenance by year end, reflecting its reduced economic viability in the current market environment, primarily in response to low cobalt prices.”

So, what kind of impact will the removal of Mutanda’s cobalt — making up a whopping 20% of global supply — have on the market? Burns explained Glencore’s closure of zinc mines in 2015 is credited with the recovery of that market, so there is precedent for the maneuver.

In addition, the electric vehicle (EV) revolution hasn’t taken off perhaps as much as expected.

“Cobalt demand has traditionally been driven by its use as an alloying element, but it is increasingly being seen as part of the lithium battery demand story because of its role in production of advanced batteries,” Burns said. “The electric vehicle (EV) market, though, has failed to match up to its hype this decade. Although both lithium and cobalt prices have risen as a result of battery makers securing their supply chain, the reality is supply is perfectly adequate.”

Meanwhile, the GOES MMI, which tracks grain-oriented electrical steel, picked up six points for an August reading of 197. 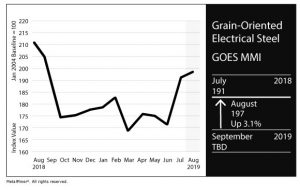 A.K. Steel, the lone remaining electrical steel producer in the U.S., announced its second-quarter earnings late last month. The firm brought in net income of $66.8 million in 2018, up from $56.6 million in Q2 2018.

Meanwhile, German firm Thyssenkrupp, also a producer of electrical steel (with plants in Germany, India and France), has announced it will continue to move forward with realignment plans amid disappointing quarterly results.

In addition to improving performance, the firm cited its planned partial IPO of its elevator business in 2019-2020 and efforts to improve organizational efficiency as part of its realignment efforts.

“The most important portfolio measure is the planned partial IPO of Elevator Technology,” the company said. “This will allow thyssenkrupp to sustainably strengthen its capital base and make the value of its elevator business visible. By retaining a majority interest, the Group will also continue to profit from future value growth. With the expected proceeds, the Group will increase its financial leeway for necessary restructuring and securing the future of its businesses.”