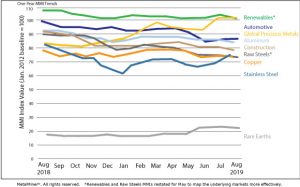 The August 2019 Monthly Metals Index (MMI) report is in the books.

After a July in which seven of 10 MMI indexes moved upward, this month a majority of the indexes retraced.

Six MMIs declined, three moved up and one held flat (the Copper MMI).

A few highlights from this month’s round of MMI analyses: