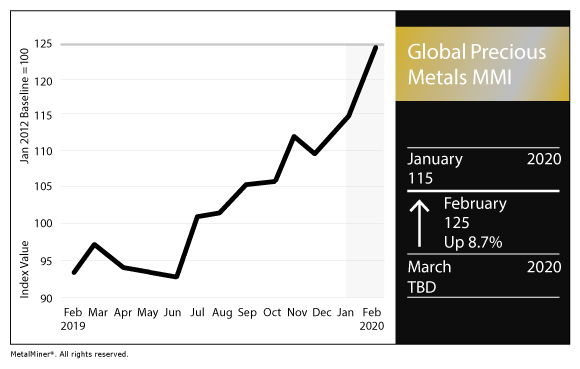 Amid general economic tensions stemming from trade, concerns about recessions and the growing coronavirus threat in China, gold prices have been on the rise.

The safe-haven asset ticked up once again this past month, with U.S. gold bullion jumping to $1,588.50/ounce.

Gold prices could continue to rise this year, particularly with the U.S. presidential election on the horizon.

According to Peter Schiff, CEO of Euro Pacific Capital, gold prices could surge above $2,000/ounce later this year, suggesting that could be the case if Sen. Bernie Sanders wins, Kitco News reported.

However, according to the World Gold Council, 2019 gold demand fell by 1% compared with the previous year.

Palladium continues to soar past platinum

Meanwhile, the spread between palladium and platinum continues to widen.

As we’ve noted in the past, platinum historically traded at a premium to palladium, a trend that flipped on its head in fall 2017.

Since then, palladium’s premium to platinum has grown; palladium has more than doubled up on its platinum-group metal (PGM) peer. As of Feb. 1, the palladium-platinum spread stood at $1,232/ounce, according to MetalMiner IndX data.

“Platinum has had a decent year from a price perspective,” Burns wrote.

“Not as strong as palladium, by any means. But despite the travails of the global automotive market, tighter emissions standards have helped demand.

“But now price support has come from an unlikely — and unwelcome — source.

“South Africa’s monopoly power utility Eskom has been suffering a wave of disruptions due to production failures that have led to blackouts to the country’s mining and refining industry.”

Recently, Burns again weighed in on Eskom, noting that its monopoly may be coming to an end in the near future.

“Funds have been made available for a rolling program of urgent maintenance, but it will take at least two, possibly three, years to end the load shedding and electricity costs will remain high,” Burns wrote. “As a result, Mantashe has been forced to announce a historic change of policy this week, freeing up mining companies to invest in their own power-generating capacity and breaking Eskom’s monopoly on power generation in the country.”

According to the U.S. Geological Survey’s most recent PGM report, South Africa was the U.S.’s No. 1 import source for PGMs.

While palladium will continue to outpace platinum this year, the results of a recent Reuters poll suggested the spread will decline in 2021.