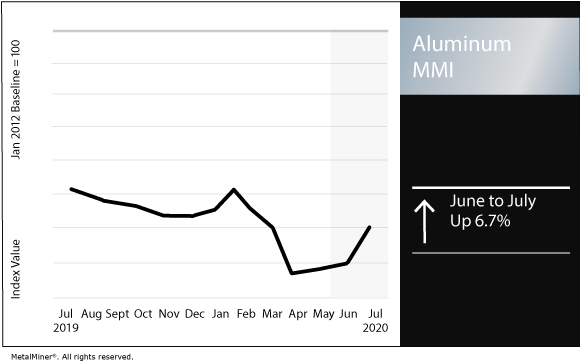 Does Your Company Know When and How to Use Aluminum Price Contracting Mechanisms?

The SHFE prices recovered 30% over the last three months.

Meanwhile, LME prices are recovering but not as quickly.

The finance trades seem to reflect this sentiment. The LME reported 159,575 canceled warrants at the end of April and reported 286,325 by July 10, suggesting there is more demand for physical aluminum and deliveries.

Unclear standards for scrap in China

In January of this year, China’s State Administration for Market Regulation (SAMR) published new standards to reclassify high-grade scrap as a resource instead of solid waste.

The custom code to define high-grade scrap should have been published before the new system took effect July 1. However, the SAMR has not published the code yet, which has caused some confusion in the market.

To mitigate the scrap shortage, China’s Ministry of Ecology and Environment has been approving import quotas for solid waste at least until the end of 2020. According to estimates by Reuters, the total approved import quotas for the year so far is approximately 693,659 tons of aluminum scrap.

In response, Bob Weidner, president and CEO of the Metals Service Center Institute (MSCI), wrote to Trump and Trudeau, asking that neither impose aluminum penalties nor protections. Weidner argued North American trading partners should be exempt, as this relationship benefits the North American economy.

Trudeau also pointed out that the U.S. does not produce enough aluminum domestically to fulfill its manufacturing needs. The tariffs will only translate into increasing manufacturing costs, which hurts the U.S. economy.

Ultimately, the U.S. and Canadian trade agencies hope this policy will help reduce global excess capacity and balance the market.

[Editor’s Note: This article was updated July 13 to include an updated headline, an updated aluminum price section and a new section on Chinese scrap.]

PREVIOUS POST:
Silver’s recovery has been dramatic — but how high can it go?
NEXT POST:
This Morning in Metals: Rio Tinto to close New Zealand Aluminum Smelters