Global Precious MMI: After big gains, silver price holds steady … but could have room to rise 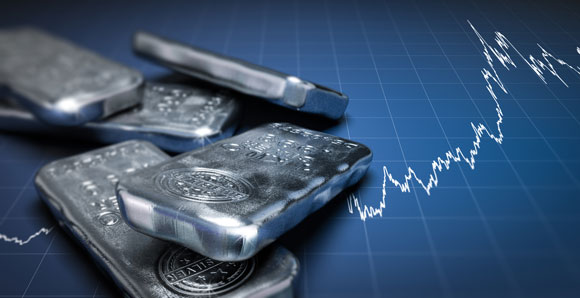 The Global Precious Monthly Metals Index (MMI) gained 3.0% for this month’s MMI value, as the silver price steadied in the second half of August. 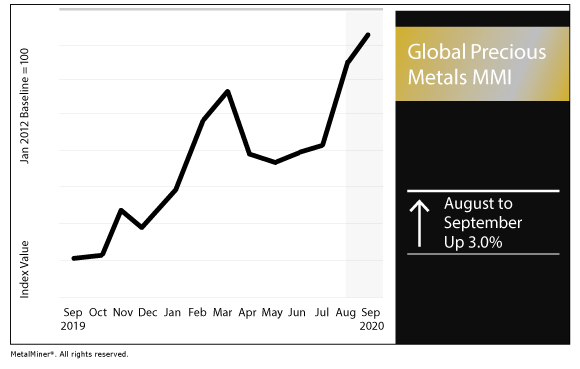 Last month, MetalMiner’s Stuart Burns delved into the rise of the silver price and how much further it could go.

But, as Burns noted, the price did retrench thereafter, generally hovering around $27 per ounce.

“But whether that will be enough to dampen spirits for a push higher in coming weeks will depend on the course of the dollar, indications on post-pandemic recovery and further action by the Fed regarding longer for lower interest rates.

“You’d be brave to bet against it.”

Since then, silver has continued to trade sideways, starting this week just under $27 per ounce before ticking up to $27.20 per ounce Wednesday.

As Burns notes, how much silver and fellow precious metal gold can continue to gain depends on the aforementioned factors.

From March 20 until the end of July, the U.S. dollar index declined by nearly 10%. Since then, the dollar has trended mostly sideways.

The index stood at 93.20 Wednesday afternoon. By comparison, the index stood at nearly 103 in late March, when the coronavirus pandemic began to significantly impact U.S. health systems and the economy.

In the same vein, the Bank of Montreal adjusted its long-term forecasts for gold and silver, Kitco News reported.

The bank forecast average gold prices of $1,920 per ounce in the fourth quarter. The new forecast marked a 4% increase from its previous forecast, according to the report.

Furthermore, the bank forecast an average Q4 silver price of $27.50 per ounce. The adjusted forecast for silver marked a 47% increase from the bank’s previous forecast, per the report.

As Burns noted, the Federal Reserve’s monetary policy will also have a hand in the strength of gold and silver prices.

On Wednesday, the Fed released a statement announcing its long-term stance on inflation.

“The Committee seeks to achieve maximum employment and inflation at the rate of 2 percent over the longer run,” the Fed said in a statement. “With inflation running persistently below this longer-run goal, the Committee will aim to achieve inflation moderately above 2 percent for some time so that inflation averages 2 percent over time and longer-term inflation expectations remain well anchored at 2 percent. The Committee expects to maintain an accommodative stance of monetary policy until these outcomes are achieved.”

Furthermore, the Fed opted to maintain the existing federal funds rate of 0-0.25%. The Fed said it will maintain the target range until “labor market conditions have reached levels consistent with the Committee’s assessments of maximum employment and inflation has risen to 2 percent and is on track to moderately exceed 2 percent for some time.”

According to the most recent Consumer Price Index (CPI) reporting from the U.S. Department of Labor, the all items index increased 1.3% over the previous 12-month period.

The MetalMiner 2021 Annual Outlook consolidates our 12-month view and provides buying organizations with a complete understanding of the fundamental factors driving prices and a detailed forecast that can be used when sourcing metals for 2021.