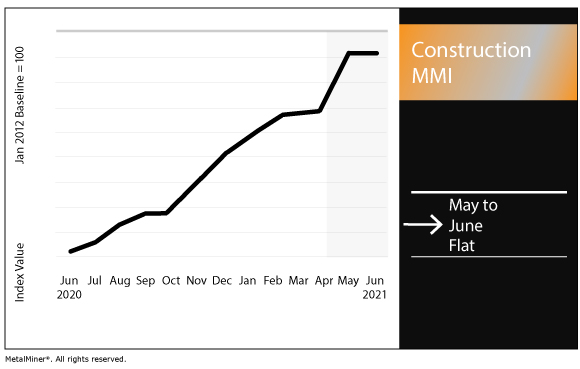 US construction spending ticks up in April

The estimated April rate marked a 0.2% increase from the previous month and a 9.8% increase on a year-over-year basis.

Construction spending amounted to $452.3 billion during the first four months of the year, or up 5.8% from the same period in 2020.

Construction employment declines in May

The Associated General Contractors of America noted contractors continue to struggle with unpredictability with respect to securing materials.

“Steadily worsening production and delivery delays have exceeded even the record cost increases for numerous materials as the biggest headache for many nonresidential contractors,” said Ken Simonson, the association’s chief economist. “If they can’t get the materials, they can’t put employees to work.”

For the third straight month, the Architecture Billings Index, released monthly by the American Institute of Architects, showed growth (meaning an index value greater than 50).

After the onset of the pandemic, the ABI had contracted each month for a year until the February 2021 reading.

The ABI marked its highest level since before the Great Recession.

“Interest in new projects remained extremely strong as well, with the Inquiries score rising to 70.8, and the value of new signed design contracts reaching 61.7, the highest score in that index since data collection started in late 2010,” the ABI report stated. “This means that not only are clients talking to architecture firms about starting new projects, but that they are also signing contracts to begin that work at a high rate.”

As we’ve noted in this space on a regular basis, shortages and delays in receiving materials have had a ripple effect. The sudden surge in demand throughout some sectors has produced a bullwhip effect.

The ABI report noted the 0.8% jump in the Consumer Price Index from March to April and the 4.2% jump from April 2020 to April 2021, which marked the largest increases since before the Great Recession.

“In addition, core inflation rose by 0.9% in April, the largest increase in that indicator since 1981,” the ABI report notes. “Rising consumer prices at this time are largely caused by supply constraints due to a shortage of key inputs subsequently leading to production delays, and by rising demands for services, particularly travel and hospitality.”

Meanwhile, in the housing market, pending home sales fell by 4.4% in April, the National Association of Realtors (NAR) reported.

“Contract signings are approaching pre-pandemic levels after the big surge due to the lack of sufficient supply of affordable homes,” said Lawrence Yun, NAR’s chief economist. “The upper-end market is still moving sharply as inventory is more plentiful there.”