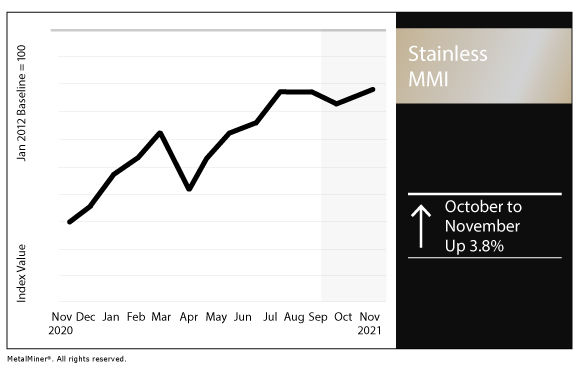 Nickel continues to be within an overall uptrend. However, LME prices experienced significant volatility throughout October.

Prices dropped as low as $17,810/mt in the early days of the month before they spiked to $20,475/mt by Oct. 21. Prices have since retraced and appear to have consolidated near February highs.

Effective Nov. 1, Outokumpu announced a base price and extras increase, in addition to adding silicon to its alloy surcharge calculation. The increases affect the 200, 300, as well as 400 series.

Extras rose for products that impact productivity or add complexity to its mix, including tempers, width and gauges. Meanwhile, as ferrosilicon more than doubled in price since September, Outokumpu announced an adder for 301 Silicon followed by the implementation of a silicon component to its alloy surcharge. NAS’ November alloy surcharge for 304 also increased from October.

Amid the ongoing power crisis that caused metal prices to surge in October, China has eased power curbs in two key stainless-producing provinces.

Both Jiangsu and Fujian were among multiple provinces forced to ration power in order to conserve tight energy supplies. Following increased coal production and imports, China managed to reduce the number of provinces with considerable energy shortages from 18 at the start of October to tow by mid-month.

Although roughly two-thirds of global production is used for stainless steel, nickel is an essential component in many lithium-ion batteries, which makes the EV sector particularly important to follow. The recently passed U.S. infrastructure bill, which more than triples the number of nationwide charging stations with a $7.5 billion investment, is expected to further accelerate and ease consumer adoption.

Automakers have also increasingly moved into the EV market.

Stellantis NV announced on Oct. 22 a joint venture with Samsung SDI to produce EV batteries. The new plant is expected to have an annual capacity of 23 GWh and will come online in 2025. This follows a similar venture announced earlier in October between the automaker and battery manufacturer LG Energy. These deals are part of the company’s larger goal to have 40% of U.S. sales come from EVs by 2030. The Nickel Institute expects the number of nickel-containing lithium-ion batteries to rise from 39% to 58% by 2025.

The World Bureau of Metal Statistics (WMBS) reported a 41,100-metric-ton deficit during the first half of 2021. Meanwhile, the International Nickel Study Group (INSGE) shows demand growth accelerating. From 2000 to 2010, the average annual growth rate reached 3.8%. From 2010 to 2020, however, that rate had reached 5%.

Indian primary nickel increased slightly by 0.4% to $20.07 per kilogram.