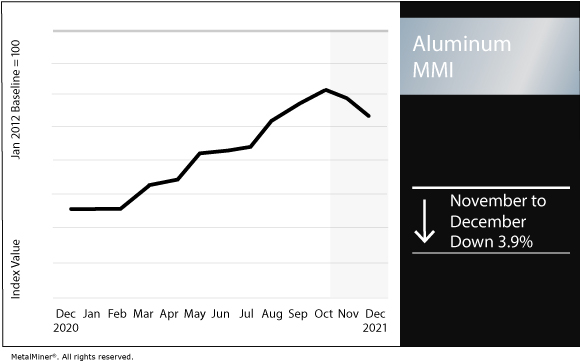 After a sharp 7.6% drop in the early days of November, aluminum prices appeared to have found a bottom. Prices then traded sideways at summer support levels.

Currently, aluminum is in a period of volatility. Aluminum is showing patterns that suggest it may either bounce off support levels to breach newly formed resistance levels, thereby confirming a reversal, or continue with further breakdowns in price to find new, lower support levels and create a change in the long-term trend.

An estimated 120,000 metric tons of aluminum extrusion ingot is expected annually following the completion of an aluminum recycling plant from Hydro Aluminum Metal of Norsk Hydro ASA. Construction will begin during the first half of 2022. The move is part of the company’s larger goal to double its postconsumer aluminum by 2025.

Meanwhile, Alcoa Corporation announced in early November it will restart 35,000 metric tons per year of idled capacity at its aluminum smelter at Portland Aluminum in Australia. Production ceased at the plant in 2009. Production will begin in the third quarter of 2022 and will bring Portland Aluminum to roughly 95% of total capacity.

This move follows the restart of 268,000 metric tons per year of capacity at Alcoa Corporation’s Alumar smelter in Brazil. The restart process began in late September. The smelter will be operational by the fourth quarter of 2022.

Upon completion, the restarted capacity at both Portland Aluminum and Alumar will bring the Alcoa Corporation up to 82% operational of its 2.99 million metric tons of global aluminum smelting capacity.

While China appeared to have largely mediated its power crisis, the approach of winter has forced the country to adjust its energy strategy.

Coal demand could increase even further, upon the potential for unusually low temperatures brought on by the La Niña weather pattern. This predicted increase has, most recently, caused China to forgo its yearlong ban and purchase nearly 3 million tons of Australian coal. In addition to expanded imports, China continues to push for increased coal output in order to meet the shortfall that led to widespread shortages, surging prices and shuttered factories. Coal production rose to its highest level since 2015 in October, Reuters reported.

Beyond the immediate term, the world’s second-largest economy appears to have tempered its longer approach to the energy transition towards decarbonization. Instead of the closures that exacerbated this year’s shortages, coal plants will be retained and the peak estimates for coal-fired power has elevated from 1,200 GW to upwards of 1,250-1,300 GW.

Coal demand is expected to peak around 2025. Natural gas will help to bridge the gap as China attempts to move away from coal.

Meanwhile, although shortage fears have abated, the future of magnesium prices will be largely contingent upon coal prices.

China has a near monopoly on global magnesium production (more than 80%). When it comes to aluminum, there is no alternative for magnesium in the creation of aluminum alloys. In fact, the aluminum industry accounts for 40% of magnesium consumption.

Amid high demand, aluminum can manufacturers are raising both prices and purchase minimums.

Ball Corporation sent a notice out to customers that, effective Jan. 1, order minimums would rise from one truckload to five for each beverage. Additionally, prices could increase as much as 50% per can. Can sourcing will likely remain tight well into the coming year. However, there should be some relief upon the completion of additional manufacturing facilities, including the North Las Vegas, Nevada plant that is expected to begin production in late 2022.

The LME three-month aluminum decreased by almost 4% month over month to $2,626 per metric ton as of Dec. 1.