Recently, MetalMiner’s Stuart Burns delved into the aluminum market deficit, one in which limited aluminum supply and elevated delivery premiums have been persistent features.

However, perhaps to some aluminum buyers’ relief, some supply is coming back online next year.

Each month, MetalMiner hosts a webinar on a specific metals topic. Sign up for the last session of the year, scheduled for Wednesday Dec. 8, during which the MetalMiner team will discuss price predictions for 2022. 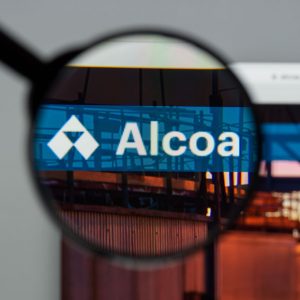 Alcoa Corporation earlier this month announced plans to restart an aluminum smelter that had sat idle since 2009.

The firm said it will restart the joint venture Portland Aluminium smelter in Australia, which has a total annual capacity of 358,000 metric tons per year.

However, Alcoa said it plans to restart 35,000 metric tons of capacity.

“Portland Aluminium is an unincorporated joint venture with 358,000 mtpy of total capacity, and Alcoa Corporation has 197,000 mtpy of consolidated capacity,” Alcoa said. “Once the restart is complete, Portland Aluminium will operate at approximately 95 percent of total capacity and Alcoa Corporation will have approximately 186,000 mtpy of its consolidated capacity at Portland operating.”

Renewed production at the Australian smelter is slated to begin in Q3 2022.

In September, Alcoa announced plans to restart its Alumar aluminum smelter in Brazil. The smelter, which has annual capacity of 268,000 metric tons per year, has been idle since 2015.

“The aluminum market is undeniably tight, as consumers are having to wait months for metal and the Midwest Premium rises,” Burns wrote back in March. “In some locations — Europe, in particular —  consumers of rolled plate cannot secure new production space until well into Q3.

“Some mills have even pulled out of quoting for new business customers in 2021. Anti-dumping legislation on flat rolled products from China and a fire last year at a Russian rolling mill have combined dramatically restrict supply options for consumers.”

Fast forward to Q4, and inventories in LME depots have continued to dwindle, Burns explained while also covering the background of the post-financial crisis aluminum market and the history of the so-called “stock and finance” trade and the shadowy world of off-warrant stocks.

However, the Midwest aluminum premium has lost some steam over the last couple of months. according to MetalMiner Insights data. 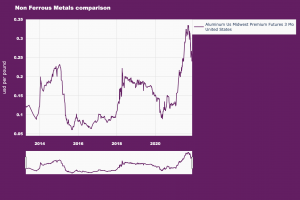 After surging over the first half of October, aluminum prices fell after Beijing intervened to mitigate coal price rises.

The LME three-month aluminum price closed Monday at $2,642 per metric ton, down 1.9% month over month. The price peaked at $3,200 per metric ton in October.

In other contributing factors, the U.S. dollar — which typically correlates inversely with commodities — has gained strength since September.

After last month’s peak and subsequent plunge, aluminum buyers will want to keep a close eye on market movements in the days and weeks ahead to determine whether a macro trend change is on the way.

Subscribers can find more aluminum analysis in the December Monthly Metal Outlook (MMO) report, which will be released Wednesday, Dec. 1.