The Automotive MMI (Monthly Metals Index) held flat from April to May. This was largely the result of a number of factors working in concert. Below, we’ll dig deeper into the automotive marketplace to see if we can determine what to expect for the rest of 2022. 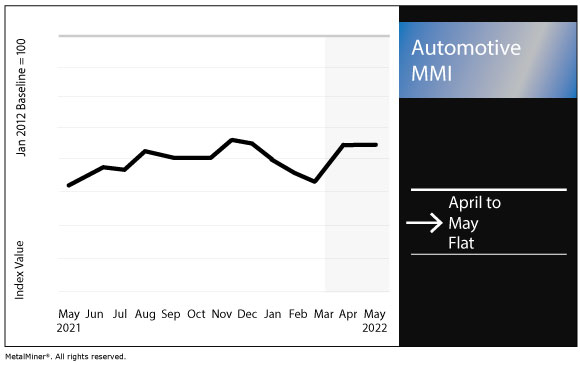 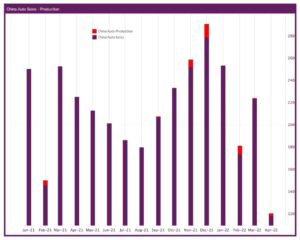 Source: China Association of Automobile Manufacturers
The data resulting from China’s COVID-zero policies continues to look grim. According to the China Association of Automobile Manufacturers, auto sales and production plunged in April. Specifically, the latter index dropped 46.2% month over month, while overall auto sales fell 47.1%
Shockingly, Tesla saw sales throughout mainland China plummet 98% from March. Meanwhile, production for the automaker also took a substantial hit, with Chinese output falling 81% from 55,462 automobiles to 10,757. As lockdowns and other strict policies remain ongoing, experts predict that much of the impact witnessed in April will bleed into May.
There is some good news on the horizon, however. For instance, COVID-19 case counts in Shanghai continue to fall. According to data released on May 11, daily infections managed to drop beneath 1,500 cases, an 18-day low. Meanwhile, around 612,500 people have tested positive for the virus since March 1.
The stark drop in daily infections signals the possibility of an end to lockdowns within the city. However, officials over in Beijing continue to ramp up pressure on the populace. Aside from closing businesses and schools, all residents are now required to work from home.
Are you under pressure to generate metal cost savings? Make sure you are following these five best practices.

Semiconductor Shortage May Not End Until 2024

According to Intel CEO, Pat Gelsinger, the ongoing semiconductor chip shortage will likely persist until at least 2024. This is a tragic prediction considering how much the current shortage is impacting equipment manufacturing.
Gelsinger previously expected the shortage to resolve by 2023. However, in an interview with CNBC’s TechCheck, she revised her estimate, stating, “that’s part of the reason we believe the overall semiconductor shortage will now drift into 2024 from our earlier estimates in 2023. More shortages now hit equipment, and some of those factory ramps will be more challenged.”
So far, the semiconductor shortage has severely impacted global auto production, especially given the slew of other factors at work. In response, AutoForecast Solutions once again lowered its production estimates for 2022.
The company now expects production in North America and the Asia-Pacific region to fall by 2% to 14.82 million and 46.68 million units, respectively. In Europe, Western and Eastern  production estimates now stand at 11.16 million and 6.26 million.

Both palladium and platinum prices saw a modest lift following the UK government’s announcement of a new round of sanctions on Russia and Belarus. As part of the package, the UK will raise tariffs on products including platinum and palladium by 35%. 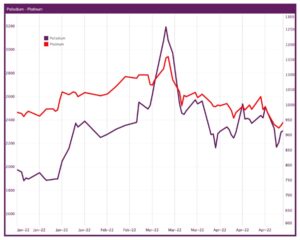 Russia produces around 40% of global mined palladium and almost 16% of global platinum. This makes the country the world’s largest and second-largest producer with respect to both precious metals. As such, the ongoing war in Ukraine and its effects stand as a leading driver for most of this year’s price fluctuations.
Indeed, both metals previously jumped in early April following a decision by the London Platinum and Palladium Market to suspend two major Russian-government-owned refiners.
MetalMiner’s free weekly newsletter provides up-to-date metal price intelligence on the impact of the war in Ukraine on metal prices and the Automotive MMI.