Russia’s invasion of Ukraine has sent shock waves throughout global metals markets. However, it’s important to remember that the most consistent longer-term driver of metal prices is Chinese demand. That’s why it’s surprising to see how little attention has been paid to the world’s largest consumer and producer of metals in recent months.

It’s understandable for global news networks to focus on the atrocities uncovered in Ukrainian cities. It also makes sense to counter such reports with more encouraging news, like coverage of the ongoing peace talks. Still, Chinese demand hasn’t gone away nor lessened. Instead, the country’s massive pull on metals prices has merely taken a back seat in the news cycle.

Energy-intensive base metals like aluminum and zinc have been driven higher by European power costs. Copper, on the other hand, has largely traded sideways as the market looks to China for direction.

Recent PMI and flash data suggests that Chinese consumption is falling and new orders are drying up. This comes on the heels of news that Beijing may be willing to allow growth rates to decline to avoid building up more debt. To make matters worse, China is also trying to tackle widespread problems in its property sector.

Capital Economics, veteran China watchers, has issued several reports on this subject. They seem to paint a picture of slowing industrial demand, services suffering from new COVID lockdowns, and property sector challenges. In fact, CE’s April 1st report specifically warned of a sharp fall in the official non-manufacturing PMI from 51.6 to 48.4. This would be the lowest figure since August and is far weaker than most industry insiders were hoping for.

An Intersection of Problems

China’s demand decline is almost entirely the result of the sharp drop in the services index from 50.5 to 46.7. The instant Beijing reimposed movement restrictions and lockdowns, consumers turned more cautious. On top of that, the Chinese industrial activity hit a five-month low in March. This was a full month before Shanghai’s lockdown officially took effect. In the absence of a miracle, April is likely to be much worse.

The longer these trends continue, the more they will impact global metal prices. Indeed, CE goes on to report that most “metal-intensive” sectors have seen rapidly-declining activity for some time now. This is largely due to reduced demand for all metals, copper included. In the absence of a sign that Beijing is planning a major manufacturing stimulus, China’s industrial sector will continue to grind to a halt. In due time, this will seriously weaken economic growth in key export markets like Europe and Japan.

Interestingly enough, this slowing demand is taking place as supply increases. Indeed, China’s power rationing has officially ended. More flexible guidance on environmental targets suggests smelters will soon ramp up output. In fact, according to Reuters, China’s daily aluminum output rose to its highest since mid-2021 in January and February. This was in spite of pollution curbs during the heating season and the Winter Olympics. It’s only fair to assume that March is going to be higher still. Unfortunately, this increased supply is hitting the market as demand slows both domestically and internationally, and logistics problems at ports are again on the rise.

Looking Ahead at Metal Prices

For now, the main narrative affecting metal prices continues to be the war in Ukraine, Russian sanctions, and European power costs. Still, as markets find workarounds and short-term solutions, the issue of Chinese demand will again move to the forefront. 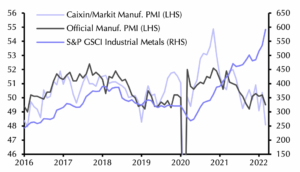 Historically, the Caixin and Official Manufacturing PMIs tend to correlate with a broad measure of commodity prices, which is clearly visible on the chart. However, rising European energy prices and the invasion of Ukraine have had a short-term impact on that relationship. That said, the connection is likely to reassert itself in the near future. When it does, the question is, will it result in a sharp uplift in Chinese economic activity or a fall in commodity prices?

We can speculate all we want. But for what it’s worth, my money says we’ll see lower commodity prices come next year.

The best way to stay informed about metal indices is Metal Miner’s monthly MMI Report. Sign up here to begin receiving it completely FREE of charge. For a real competitive edge in the metals industry, try a demo/tour of our revolutionary insights platform here.