Home | Best of MetalMiner | Best of 2018: Top Copper Posts of the Year, From Escondida to Trade Fears
Industry News

Best of 2018: Top Copper Posts of the Year, From Escondida to Trade Fears

We’ve taken a stroll down Steel Street and Aluminum Avenue — what about copper?

Need buying strategies for copper in 2019? MetalMiner’s Annual Outlook has what you need

The LME copper price surged to a 2018 high in early June, reaching $7,261.50 per ton, before plunging below the $6,000 per ton level about six weeks later. Since then, copper has traded relatively sideways through much of the year’s fourth quarter. 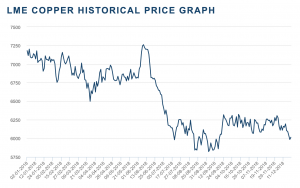 2018 also saw a labor saga at BHP’s Escondida mine in Chile — among other 2018 copper mine labor disputes — which was eventually resolved after months of talks.

On a macroscopic level, the ongoing trade war between the U.S. and China — yielding a total exchange of $360 billion in tariffs on each other’s imports — has had a depressive effect on markets around the world. China has seen softer demand for various metals, including the so-called Dr. Copper (dubbed as such for its perceived efficacy as an indicator of overall economic health). Some sort of trade agreement between the U.S. and China will go a long way toward stabilizing and, furthermore, injecting life into metals markets.

With all of that said, let’s take a ride down Copper Court and look back at some of the top copper stories on MetalMiner this year:

Want to a see copper price forecast? Get two monthly reports for free!

PREVIOUS POST:
This Morning in Metals: Shanghai Copper Prices Flatten After Earlier Declines
NEXT POST:
Best of 2018: Top Trade Posts of the Year, From Section 232 to RCEP