Last year, the metal affectionately dubbed “Dr. Copper” — essentially, for its role as a general indicator of economic health — saw its price soar.

This year? Not so much.

The metal climbed above $7,200/metric ton on the LME in December, but has since plummeted. 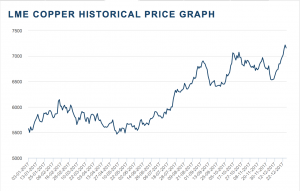 The U.S. dollar, which is typically inversely correlated with base metals like copper, has generally held steady in March (albeit with some peaks and valleys), standing at 90.32 on March 1 and 90.01 as of Friday afternoon, March 30.

Meanwhile, on the supply side, Antofagasta’s Los Pelambres mine in Chile avoided a work stoppage, the Financial Times reported. The mine is the Chilean company’s biggest, and produced 356,000 tons of copper last year, according to the report.

According to the Reuters, the Shanghai Futures Exchange copper price was set to post its biggest quarterly drop since 2013. In March alone, the price dropped 5.8%, according to the report.

All sorts of markets were affected by President Trump’s announcement late last month regarding the next step in the Section 301 investigation of alleged unfair trade practices and intellectual property theft by China. As part of the announcement, the president said tariffs of up to $60 billion could be imposed on Chinese goods.

Not surprisingly, the president’s words affected markets, but it remains to be seen what the long-term impact will be; that likely won’t be known until the Section 301 case wraps up and all the chips fall where they fall. China’s Ministry of Commerce has indicated in a statement that it does not want a trade war, but is not afraid of one.

If a true trade war comes to pass, copper won’t be the only thing affected.

In other news worth monitoring, our Stuart Burns wrote earlier this morning about the Democratic Republic of Congo, where President Joseph Kabila has called for ditching a 2002 mining charter in an effort to secure a larger share of wealth from the country’s vast natural resources, something multinational miners are looking to avoid.

While cobalt draws many of the headlines when it comes to the DRC, copper is also included in its basket of valuable resources. While it’s still unclear how the issue will progress and which materials would in fact be included in a redrawn charter — but, as Burns notes, it would not exactly be surprising if copper is included in any new charter.

PREVIOUS POST:
DRC Makes a Grab for a Larger Slice of the Pie
NEXT POST:
This Morning in Metals: China Responds With $3B in Tariffs on U.S. Goods