The Renewables Monthly Metals Index (MMI) fell one point for a November MMI reading of 97. 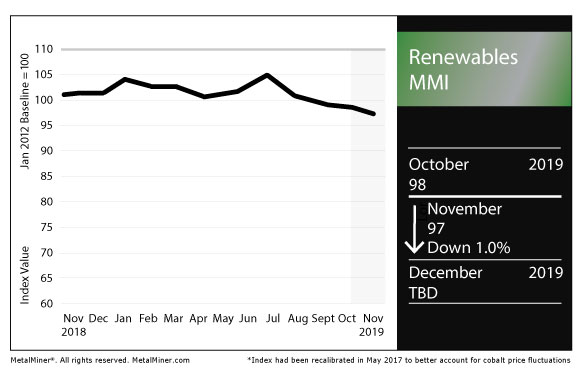 According to research group Antaike, global cobalt output growth is expected to slow in 2020, Reuters reported.

The report cites Antaike nickel analyst Joy Kong, who said cobalt production is expected to rise by 5,000 tons in 2020.

Cobalt is coveted for, among other applications, its use in electric vehicle (EV) batteries, which will be expected to drive demand for several metals as EV demand rises.

However, plunging prices have proved to be a challenge for miners, even mining giant Glencore.

Earlier this year, Glencore announced it would idle production at its Mutanda copper and cobalt mine — the world’s largest cobalt mine — in the Democratic Republic of the Congo by the end of the year.

MetalMiner’s Stuart Burns earlier this year weighed in on the miner’s decision.

“Glencore has a record of taking the hard decisions early and shuttering mines that are loss-making,” he wrote.

“The miner closed zinc mines in 2015 in response to low global prices; its actions are credited with helping the zinc market recover as a result.

“Cobalt demand has traditionally been driven by its use as an alloying element, but it is increasingly being seen as part of the lithium battery demand story because of its role in production of advanced batteries. The electric vehicle (EV) market, though, has failed to match up to its hype this decade. Although both lithium and cobalt prices have risen as a result of battery makers securing their supply chain, the reality is supply is perfectly adequate.”

In fact, LME cobalt has had some upward momentum in recent months, reaching $35,000 per ton this week.

“In the longer term, though the fundamentals remain solid, EV sales will rise over the next decade as prices become more affordable, ranges extend and charging infrastructure improves,” Burns explained. “Glencore is putting Mutanda on care and maintenance for the next two years, after which it will review its options.

“Taking some 20% of global supply out of the market will put a floor under prices and shorten the timeframe over which prices will recover.”

Sticking with the cobalt theme, Burns delved into trader Trafigura’s bet on cobalt amid its price resurgence in recent months.

“According to the Financial Times, Trafigura is betting that the Mutoshi mine, which is owned by DRC-based company Chemaf, can become a competitive producer, just as demand starts to rise on the back of a global rise in EV sales,” Burns wrote.

“Trafigura is looking to contribute financing in return for marketing rights on the cobalt. Mutoshi hopes to produce 16,000 tons of cobalt annually by the end of next year, should financing be put in place.” 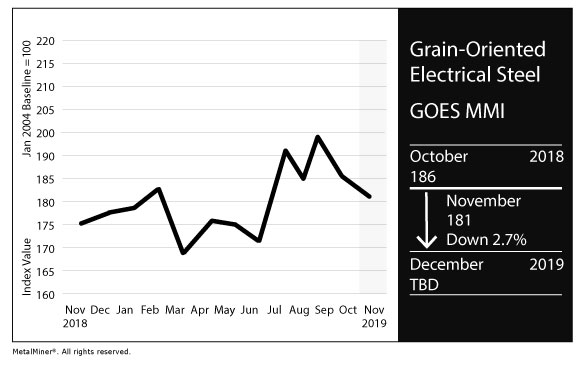 AK Steel, the only U.S. producer of electrical steel, recently reported its third-quarter financial results. In the third quarter, the company’s stainless/electrical segment saw shipments of 187,900 tons, down from 206,600 tons in Q3 2018.