The Raw Steels Monthly Metals Index (MMI) showed some strength this month with a three-point increase, rising to 69 from 66 last month. 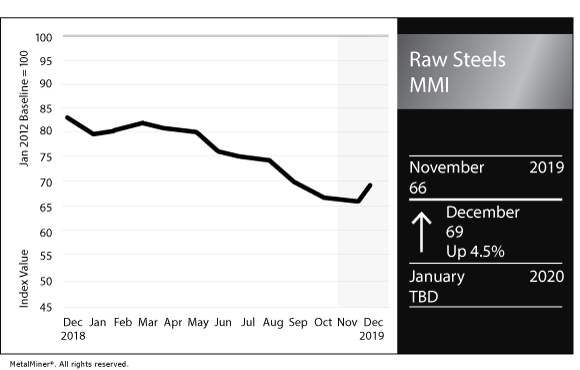 Once again, plate price increases have lagged behind the other forms, (similar to July, when plate prices failed to gain):

However, plate prices now look in line with historical norms, in terms of relative values across key types. Plate prices may now begin to move with other prices, rather than on a unique trajectory.

Chinese HRC and CRC prices increased during November — by roughly 6% and 4.5%, respectively — bringing prices back to September levels.

In order to better align fixed production costs with domestic demand, Nippon Steel may close two of 15 blast furnaces in operation across the country by March 2024.

Demand for steel slowed for the Japanese producer due to decreasing domestic population, higher export barriers, and trade issues, according to management team discussions with the press.

Typically, the company exports more than 40% of output. Recently, however, export levels suffered due to the desire of other Asian countries to boost domestic steel production, in addition to increased Chinese exports.

Major merger on the horizon for Cleveland-Cliffs, AK Steel

Cleveland-Cliffs now derives around 23% of annual income from AK Steel, the company’s largest customer with the exception of ArcelorMittal SA.

The agreement still faces antitrust vetting. Completion of the deal is expected during H1 2020.

While growth remains somewhat constrained as 2019 comes to a close, the U.S. economy continues to maintain momentum overall.

According to the most recent Beige Book report released by the Board of Governors of the Federal Reserve System, based on data collected through Nov. 18, economic activity in aggregate expanded modestly from October through mid-November, at a similar pace as the previous reporting period.

The Federal Reserve Bank of Atlanta’s GDPNow model estimate of GDP growth jumped by 0.5% to 2.0% on Dec. 6 based on recent data inputs.

GDPNow provides a running forecast of the official estimate in advance to its release and is based only on mathematical results of the model.

Improved demand appeared to push up prices this month.

It’s still too soon to tell if price increases will continue from here.

LME billet three-month prices increased the most among index values this month, rising by 9.3% month over month to $262/st as of Dec. 1.

Iron ore prices remained essentially flat, with a mild 0.1% increase to around $64 per dry metric ton.