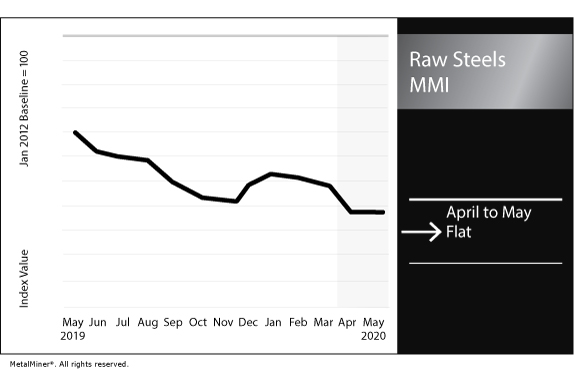 The steel sector has taken a major hit as a result of the COVID-19 crisis, with firms adjusting for lighter order books and demand and, in many cases, opting to suspend production.

For the week ending May 9, U.S. domestic raw steel production totaled 1.20 million net tons at a capacity utilization rate of 53.7%.

Production for the week marked a 36.0% decline from the same week in 2019, when the capacity utilization rate was 80.8%.

However, production for the week ending May 9 rose 5.2% from the previous week, when production reached 1.14 million net tons at a capacity utilization rate of 51.1%.

AK Steel, which was acquired by Cleveland-Cliffs earlier this year, announced its Dearborn, Michigan steel plant will close in July.

Steel demand has been hit hard by the decline in automotive sales amid the COVID-19 pandemic.

In late March, automakers suspended production around the world.

However, automakers have begun to restart their operations this week. Detroit’s Big 3 has set a target date of May 18 for the restart of North American operations, which should serve as a demand boost for steel (parts suppliers have already restarted production this week).

With steel supply being squeezed — as noted earlier — steel prices should begin to bounce back; however, it should be noted that any economic recovery related to the damage caused by the COVID-19 pandemic is not likely to be swift.

Cleveland-Cliffs President and CEO Lourenco Goncalves was optimistic about the recovery during the firm’s first-quarter earnings call.

“We are going to start seeing numbers normalizing early in June,” Goncalves said of the auto industry, as quoted by the Duluth News Tribune.

“Our actions in the early days of the pandemic included, among other things: enacting strict social distancing on the job; continuous cleaning of all facilities; enhanced safety procedures at all operations; closing or idling facilities, and extending outages at several operations; cutting capital, operating, and overhead costs; instituting temporary executive and salaried pay decreases throughout the organization with disproportionately high contribution from the top of the organization; temporarily suspending the construction of the HBI plant; discontinuing the payment of dividends; and raising additional capital as insurance,” Goncalves said in the firm’s earnings report.

“As we start the path to return to normal levels of business in the second half of the year, we are confident that we have the ample liquidity and all other means to remain comfortable through whatever uncertainty that remains.”

In the first three months of the year, global crude steel production reached 443.0 million tons, down by 1.4% compared to the same period in 2019.

PREVIOUS POST:
This Morning in Metals: U.S. steel shipments drop 6.3% in March
NEXT POST:
Oil prices not likely to see true bounce-back in the near term