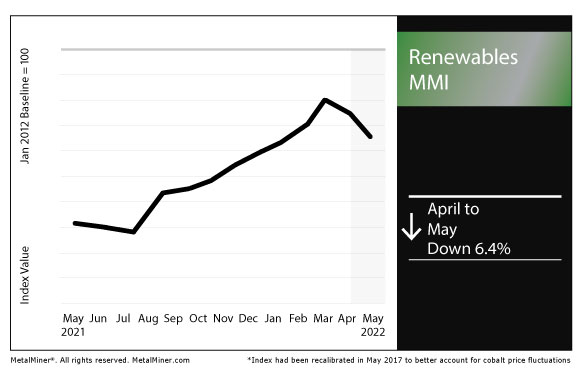 Biden’s Plan for a More Renewable US

Breaking news in the US Green Energy push. The Biden Administration has released an “action plan” intended to accelerate permitting on new green projects. The goal is to loosen the administrative red tape that keeps infrastructure investments from hitting their time and budget goals. The move is part of the $1.2 trillion Bipartisan Infrastructure Law. So far, this has proved to be one of the administration’s only “wins.”

Back in mid-April, MetalMiner reported that Biden had implemented the Defense Production Act again. This time, it was to boost US production of materials related to large capacity batteries, semiconductors, and critical minerals. The Cold War-era act has so far been used three times by the Biden administration to increase the production of protective equipment, vaccines, and fire hoses.

From Utah: The Desert “Goes Green”

The Advanced Clean Energy Storage Project plans to be the world’s largest industrial green hydrogen facility. The site will be located near Delta, a small town near Central Utah’s Sevier River. This particular part of the state is already home to a hybrid plant combining geothermal and hydropower energy. It is also rich with solar fields, wind farms, and even hog manure natural gas plants.

The Advanced Clean Energy Storage Project will produce and store green hydrogen, which has significantly lower carbon emissions than traditional hydrogen. It is produced by using green energy to power water electrolysis, making it far superior to fossil fuels. In mid-April, the organization received a $500 Million conditional commitment from the US Department of Energy.

The UK is Seeking a New Source of Solar Power: Outer Space

Over in the UK, the green energy conversation is taking a turn towards science fiction. More than 50 British tech organizations, including Airbus, SSTL, and Cambridge University, are currently working with the UK Space Energy Initiative to develop a space-based solar power plant.

The group believes that beaming electricity from space will help the UK meet its greenhouse gas emission targets by the middle of the century. Spokespersons for the project state that all of the technology necessary for such a power plant already exists. The problem, they say, is how to combine them into a project of this size and scope.

While Space.come has already produced a compelling video of what this process might look like, experts say we’re still years away from a workable solution.

The world is moving toward green energy, which necessitates a wide range of valuable metals. Keep yoursTelf informed on all the latest news and information by signing up for our weekly MetalMiner newsletter here.

The GOES MMI, the index for grain-oriented electrical steel, rose 14.1% from April to May. 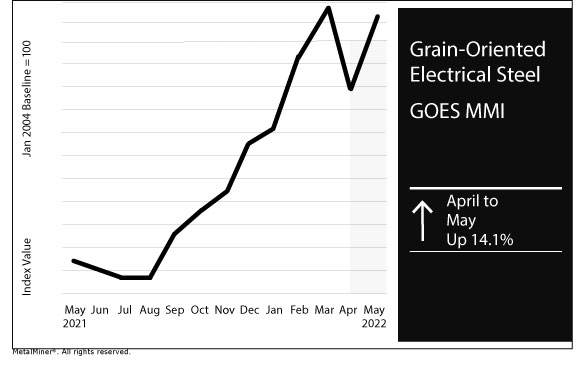 Meanwhile, the largest grid operator in Texas asked residents to conserve energy during the current heat wave. The directive asked for homes to be set at 78 degrees or higher from 3-8pm over the weekend as well as to lay off the use of heavy appliances. Six power plants tripped offline at one time, costing the grid the energy to power 600,000 homes.

Back in early May, Zacks Investment Research cut shares of Aperam from “hold” to “sell.” This triggered a brief sell-off that was quickly recovered the next day as investors looked to grab up discounted shares. In the week since, however, the company has seen a steady decline, closing out this Friday at $35.85 a share. This is just shy of the 52-week low of $34.61 and well below the year high of $65.

Aperam S.A. manufactures and markets Stainless steel throughout South America and Europe. It produces both GOES and non-grain-oriented electrical steel and nickel alloys. Other major research firms have maintained the company’s “hold” rating, but price targets are already starting to slip.

Get all the latest metal marketplace news, facts, and figures with MetalMiner’s monthly MMI Report. Sign up here to begin receiving it FREE of charge. If you’re looking for a real competitive edge in the metals industry, try a demo/tour of our revolutionary insights platform here.