After looking at several factors playing into the gold production landscape for the medium-to-long term (begin with Part One here), we offer some conclusions and takeaways.

Gold producers are currently earning cash margins close to levels seen in 2008-09. Since then, there has been a significant increase in the influence of factors like commodity price and exchange rate volatility, regulatory and environmental obligations, availability of finance along with rising labor costs, consumables and energy costs on gold mining.

Most corporate managements have limited control over these factors, which in turn sets a floor to how much cost reduction could be achieved by the gold producers in response to the prevailing bear market, making eventual production cuts inevitable.

END_OF_DOCUMENT_TOKEN_TO_BE_REPLACED

Will Production Costs Set a Long-Term Floor Price for Gold?

Will production costs set a long-term floor price for gold? (If you missed the key strategies that gold producers will have to undertake to remain profitable, don’t miss Part Four and Part Five of this series.)

While the cash costs (mine-level costs) will be a decisive factor over the primary supply of gold in the medium term, the all-in sustaining costs will have a significant bearing on the long-term mine supply of the metal.

END_OF_DOCUMENT_TOKEN_TO_BE_REPLACED

Should Gold Miners Be Hedging Again? Falling Prices Are Food For Thought

Gold producers may tap several key strategies for sustainability in a low-gold-price environment, such as more M&A, cost cuts/layoffs/production cuts, and restucturing their portfolios for more flexibility – not to mention hedging. (Continued from Part Four.)

On the flexibility point, upcoming projects could face delays as producers feel the need to have more flexibility in the allocation of available capital in a low-profit environment.

Barrick Gold Corp., for example, has suspended its Pascua Lama project in Chile in favor of more a prudent resource allocation. Besides these, we could also see a reduction in miners’ engagement with contractors. Rationalizing working capital needs through group procurement and supplier negotiations, along with more efficient inventory management, are likely to gain management attention in coming months.

What about high grading, is that an option?

END_OF_DOCUMENT_TOKEN_TO_BE_REPLACED

What are the strategies expected from gold producers to sustain this low price environment? (Continued from Part Three.)

To be able to sustain itself (especially its profitability) in this low gold price environment, the gold mining industry may see some consolidation in the coming one to two years.

Many mid-tier and junior gold producers possess some of the highest-grade reserves of gold and with valuation of these assets revised downwards due to fall in gold price, some of the well-placed miners may be presented with an excellent opportunity to plan for mergers or acquire strategic assets.

Having economies of scale is likely to be one of the key factors in ensuring sustainability for many gold producers.

END_OF_DOCUMENT_TOKEN_TO_BE_REPLACED

As producers endeavor to cut costs, they are likely to halt, downscale or offload operations in South Africa, Australia and Papua New Guinea. We went into more detail on production cutbacks in Part Two.

This means it could be a long time before projects like the Golpu mine in Papua New Guinea and the Pebble gold mine in Alaska, among many others, could see commencement of production operations. 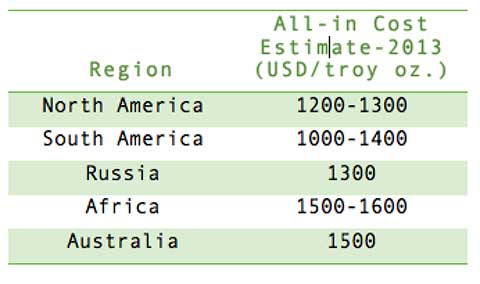 Although South America is currently the lowest-cost region for gold mining, the Pascua Lama project belonging to Barrick Gold Corp. may not see the start of mining operations before 2016 unless environmental safeguards are met by the company.

Which Gold Miners Will Remain Profitable?

END_OF_DOCUMENT_TOKEN_TO_BE_REPLACED

Bet you were wondering about the cost drivers of operating gold mines. Worry not; here we go. Continued from Part One.

Over the past decade, gold producers have seen their mine operating costs rise by an average of 15% annually, mainly driven by rising labor, fuel and consumables costs and falling ore grades.

The fall in average grade of ore mined has been declining primarily due to the fact that most of the high-grade ores have already been mined, apart from the fact that rapidly rising gold prices made mining of lower grades a profitable option for most miners.

Ore grades have fallen nearly 50% since 2006 and have led miners to incur huge capital expenditures over mine expansions and exploration for new reserves in order to be able to maintain production levels. The global gold mining industry has seen its capital expenditures expand more than five-fold since 2006.

However, this has failed to translate into any improvement in the ore grades mined.

END_OF_DOCUMENT_TOKEN_TO_BE_REPLACED

After Barrick Gold Tumble, How Mining and Price Dynamics Are Changing

Gold’s fall into a bear market this year has compelled as many as eight of the top 10 gold miners to announce asset write-downs to the tune of millions of dollars each.

The combined worth of those write-downs exceeds USD 27 billion, with Barrick Gold Corporation leading the group, declaring a USD 9 billion write-down in the value of its assets. Nearly half the global gold production operated with negative margins during Q2 2013.

The dire state of the gold mining industry is evident from the precipitous 45% decline in value of the NYSE Arca Gold Miners Index since the beginning of 2013. Gold miners are not only faced with weak prices of their output, but also rising operating costs which have escalated more than four-fold since 2001.

This series of articles will attempt to identify the implications of the current gold price environment for the gold mining industry, and in the process, understand and illuminate the following aspects of the primary production of gold: