The result is expected to be a dramatic reduction in the amount of copper and plastic used. Every year the Volvo Group should be able to dispense with around 3,000 miles (5,000 kilometers) of cabling, which is the equivalent of 18 metric tons of copper and 33 metric tons of plastic. 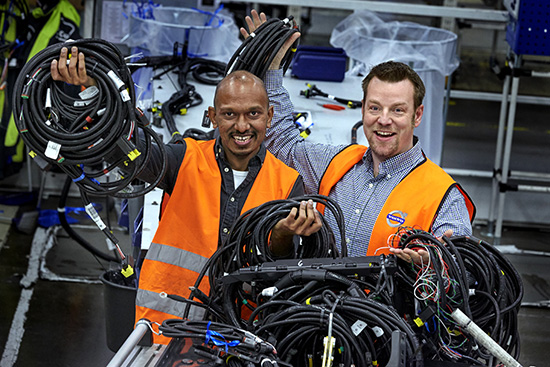 Volvo is saying goodbye to miles of cabling in its truck division. Can IoT sensors replace all that expensive copper and plastic? Source: Volvo.[/caption]

“The savings could amount to a large number of hours, sometimes even days. In the factory, the cables are awkward to handle and time-consuming to fit in the right place,” said Jonas Hagerskans, a development engineer at the Volvo Group. “The wireless sensors are much simpler to install. The cables are also sensitive to dirt and rust and prone to faults. By replacing the cables with wireless sensors, it is possible to prevent all the potential cabling faults. When trucks come into the workshop for repairs, identifying faults in long cables that are difficult to access is very time-consuming. In the future, our customers could get their trucks back from the workshop more quickly.”

Depending on the size of the truck, a reduction in cable length of between 40 and 70 meters has initially been identified. Given an annual production of 100,000 trucks, this amounts to the above-quoted numbers.

The project is part of the Dependable Embedded Wireless Infrastructure (DEWI) initiative, sponsored by the E.U. center for competence and research. DEWI is made up of 58 partners from all over Europe, one of which is the Volvo Group. Volvo said the savings would also translate into reduced downtime for trucks.

The project will come to an end in 2017, but the work within the Volvo Group in this area will continue.

While this is certainly a cause for concern among Volvo’s copper suppliers, the lightweighting and sensor performance capabilities offer a revolutionary change for the automaker. We’ve observed the reduction in cabling and automotive weight for more than a decade now. We’ve also documented that while more automotive electronics have meant use of more superconductors like silver, they’ve simultaneously reduced the need for copper and aluminum cables via on-board automotive ethernet.

The rise of aluminum as a conductor has already contributed to the fall in automotive use of copper.

Japan’s Furukawa Automotive Systems, a unit of Furukawa Electric Co., has developed corrosion-proof terminals for aluminum wires in a harness, the backbone of a car’s electrical system. Furukawa has been supplying aluminum wire harness systems to Honda’s light vehicles and Toyota’s luxury vehicles.

If Volvo’s research shows better productivity, as projected, from internet-connected sensors then the drop in automotive use of copper will get even steeper in the coming years. We do, wonder, though if automobiles really are ready to essentially rely on an internet of things approach to connectivity and basic maintenance. If it works, the possibilities are endless.