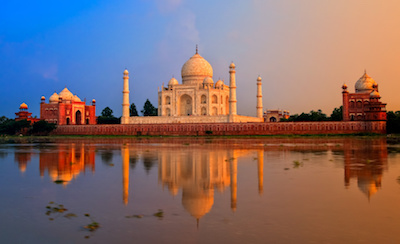 A new report in HSBC’s Navigator series focuses on the long-term ascendancy of the Asian region as it explores both anticipated and actual trends in India’s trade patterns with its nearby neighbors.

India enjoys a balance of trade surplus in services but a deficit in goods with much of its services focused on Western tech and B2B markets. But that pattern is not changing, surprisingly, partly due to government encouragement and partly due to the relative size of the economies closer to home.

Largely as a result of fears of protectionism in the West, India’s policy has been to work closely with neighbors to develop regional trade opportunities.

However, despite the South Asia Free Trade Agreement (SAFTA) and the ASEAN-India Free Trade Area (AIFTA), progress in increasing trade with Asian neighbours has been slow. Now exporters are looking to the Regional Comprehensive Economic Partnership (RCEP), to which India is an intended signatory, in order to create opportunities in what will be the world’s largest trading block.

India’s exports are changing, partly under government encouragement but mostly in response to changing global demand. Traditional products like clothing and apparel are declining. Currently in third place, they are expected to slip to 10th over the next decade, as this table shows. 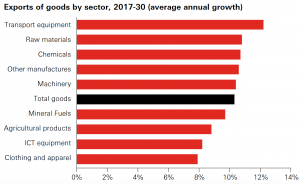 The reports estimates that by 2030, India will be increasingly exporting goods within the Asian region, with export growth to Asia Pacific outpacing India’s exports to Europe and North America. In terms of individual countries, the U.S. and UAE will remain the top two export destinations, but China will rise in importance and Vietnam will also join the top five list. The top 10 fastest growing exports destinations will almost all be in Asia up to 2020, with growth in some markets rising at 12-13% per year.

Firms looking to export to India will face growing competition from China. But with a rising middle class and strong demographics, India represents an important export market for Western firms in the decade ahead. Navigator estimates that the greatest opportunities will remain in machinery, as this graph illustrates: 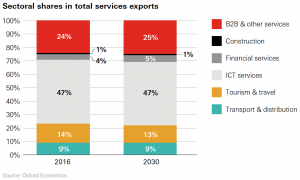 Perhaps more surprising is the expected static nature of India’s exports. The report sees little change in the mix of destinations, with India’s top service exports destinations remaining largely unchanged between 2017 and 2030, with the U.S. and the U.K. occupying the top two spots.

Not only will export markets remain the same, so too will the mix of products and services with a continued reliance on B2B and ICT services.

To what extent HSBC have their estimates right, only time will tell. But they are unlikely to be wrong in one central tenant, and that is that mid- to long-term growth is likely to be at the upper end of emerging market scales over the next decade, and India offers one of the brightest large emerging market opportunities in the years ahead.

PREVIOUS POST:
This Morning in Metals: European Leaders to Address Steel Tariffs in Meetings with Trump
NEXT POST:
Best Friends Donald Trump and Saudi Arabia Are at Odds Over the Oil Price