You would think that U.S. Treasury Secretary Steven Mnuchin’s announcement last week of a “framework” deal that would see Beijing increase its purchase of U.S. goods and services and commit to reducing the U.S.’s $337 billion annual trade deficit with China would have been met with universal acclaim.

Certainly, the stock markets surged on the news on what appeared to be vindication of the Trump administration’s hard-line approach to realign the stars of the US-China trade relationship.

Yet, as the Financial Times points out, the news has been met by howls of protest in some quarters of the U.S.

The Financial Times reports U.S.-China hawks fear that the Trump administration may be giving up the leverage it created by threatening tariffs on up to $150 billion in Chinese imports earlier this year and sacrificing a broader push for change in China.

Even accepting the idea that you cannot please all of the people all of the time, what chance does Mnuchin’s team have of negotiating either an increase in U.S. exports or a reduction in Chinese imports — or a mixture of both — to bridge this $337 billion gap?

None, is the immediate answer.

To be fair, the U.S. has set a $200 billion deficit reduction as its target, but even that is going to be extremely challenging. This is particularly true if the U.S. rightly sticks to its guns on respect for intellectual property rights and associated design theft in China, as this will limit U.S. firms from selling or sharing technologically sensitive products with China. For example, China is desperate to lift the seven-year ban on Chinese telecommunications company ZTE sourcing US parts, a ban which it says jeopardizes the future of the company and its 70,000 employees.

Mnuchin is said to be following a strategy of setting targets industry by industry, an easy first win being to ramp up exports of energy by some $50-60 billion. Bloomberg ran a report that identified considerable opportunities in ethanol, liquefied natural gas (LNG) and crude oil exports. China is already the U.S.’s second-largest buyer of crude oil, but demand is growing across all energy types and China could certainly switch supplies to the U.S. 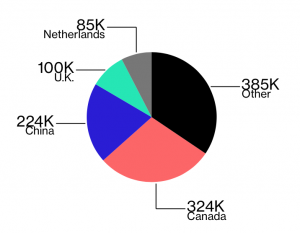 The U.S. is also a major supplier to China of agricultural products, particularly soybeans and cotton. The U.S. is not without its rivals, particularly Brazil, but while China has diversified purchasing there is scope within a central-command economy to switch more to U.S. sources.

Is that what the U.S. really wants, though, to become a raw material and agricultural products exporter like Russia or Brazil?

Surely, the U.S. should be promoting higher value-add goods and services as its priority? That’s where the jobs and future lie, but they also run counter to China’s avowed aim of becoming a world leader in advanced technologies itself, per its Made in China 2025 policy.

Forbes explains the program aims to increase the domestic content of core materials to 40% by 2020 and 70% by 2025. At present, domestic content is relatively low for high-tech goods, with the foreign content comprising more than 50% in these products on average. In some categories, such high-level digital control systems and high-level hydraulic components, China is almost entirely dependent on foreign production. ZTE’s reliance on U.S. components falls exactly into this situation. The short and simple route to achieving the strategy’s objectives is to pinch foreign designs and technologies until you can develop your own.

This story has a long way to run, but China hawks should not be alone in worrying that in order to claim the headline “deal” of a possibly temporary reduction in the trade deficit, the administration does not sell the farm down the road.

There is much that is wrong with the global trading system. As the two largest players, the balance between the U.S. and China is the most stark. However, it is equally a very complex situation and, as such, is not well suited to a quick-fix deal.