Global Copper Mine Production Up 4.5% Through First Seven Months

By volume, copper production increased by 500,000 tons, according to the report, largely paced by gains in Chile and Indonesia.

As for Indonesia, its output surged by 30%, largely due to a temporary ban on concentrate exports last year, the ICSG report notes.

Mine production was down in Canada and the United States over the first half of the year, by 6% and 7%, respectively.

In terms of refined copper production, primary production is estimated to have increased 0.5% year over year, while production from scrap jumped 6%, good for an overall increase of 1.5%. China was the main contributor to production growth in this category, while Chilean production rose 5%.

On the other end of the spectrum, Indian production fell 22%. Production declines were also seen in Australia, the Philippines, Poland and the U.S. “as a consequence of maintenance shutdowns and operational issues.”

The refined copper balance through the first seven months of the year shows a deficit of 155,000 tons, according to the report. 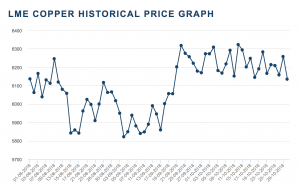