According to the International Aluminum Institute, global aluminum production in May reached 5.43 million metric tons, holding flat from May 2018 production.

By region, China led the way with 3.09 million metric tons produced, about flat compared with May 2018 production.

As for prices, LME aluminum has been trending downward since March. 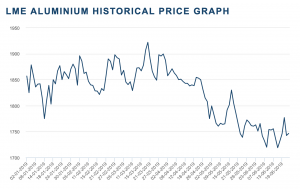 According to the Aluminum Association’s monthly Aluminum Situation report, aluminum demand in the U.S. and Canada increased an estimated 0.4% over the first four months of the year.

Demand reached an estimated 9,547 million pounds for the year through April, according to the Aluminum Association.

In terms of production, the Aluminum Association reported primary production in the U.S. and Canada reached an annual rate of 4.01 million tons in May, marking a 0.4% decline from the April rate.