Indian Economy Surges But Questions Remain About the Rise’s Longevity

India is booming, the Indians would claim — and who could deny they are doing well?

The economy grew at 7.7% from January through March, expanding gross domestic product (GDP) to $2.6 trillion, eclipsing France to become the world’s sixth-largest economy. 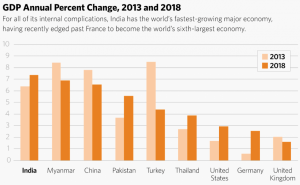 But while growth has been impressive, questions are being asked about how much longer the economy can keep it up.

The rupee has tumbled more than 8% against the rising dollar in 2018, according to a Stratfor report. India is the world’s third-largest consumer of oil and imports nearly 80% of its crude, the report states.

Since oil is a key input across various sectors of the economy, rising crude prices will put upward pressure on inflation, which rose to 5% in June (a five-month high).

With an election coming up in 2019, Prime Minister Narendra Modi will be unlikely to raise interest rates too much, or rein in spending as he courts the farmer vote, or worry unduly if the deficit reduction targets are not met this year or next.

Securing a new five-year term will override such considerations at the expense of longer-term fiscal improvements. In the process, he will store up issues for the next administration; the longer they are allowed to grow, the more severe the corrective action will need to be.

On the plus side, a lower rupee will boost exports, making Indian industry and service providers more competitive — or, at least, more profitable on the international market than previously.

But with only 18.9% of GDP attributable to exports, the economy is more likely to be harmed by higher import costs fueling inflation and an outflow of currency reserves than it is the benefit from an increase in exports.

India may be growing strongly this year, but history has shown it needs to. With 12 million young people coming onto the job market each year, if India is to grow its minuscule middle class to become the engine of consumption that it has in China, the country has to generate a lot of well-paying jobs in the year ahead.

Steady as she goes should be the captain’s orders, not boom and bust.

PREVIOUS POST:
This Morning in Metals: U.S. Steel Imports Fall to 2.2M MT in June
NEXT POST:
U.S. Consultations Fizzle With India, Others Over Metals Tariffs