Not before time, China’s steel industry is making some progress towards consolidation.

The two mills are geographically close to each other, with Magang headquartered in Maanshan city in China’s eastern Anhui province, about a four-hour drive from Shanghai, where Baowu Group is based, the article states.

From a product perspective, the two companies are broadly complementary.

Baowu mainly churns out flat steel products, while Magang’s output is split between flat and long steel products used in construction. There may be some consolidation as a result of the merger, but Baowu’s corporate strategy is to reach 100 million tons of capacity by 2021 from its current 70 million tons, so closing capacity is probably not the primary driver. 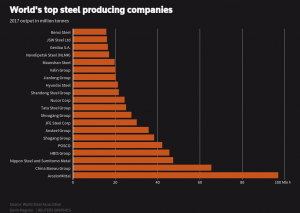 The combined group, though, would be a potential rival to ArcelorMittal only in tonnage terms. Globally, the firms are poorly represented, with most of Magang’s production consumed domestically and Baowu exporting just 3.8 million tons from its Baoshan Iron and Steel division last year.

The merger fits with Beijing’s strategic objective of putting 60% of its national steel capacity in the hands of its top 10 (mostly state) producers by 2020, up from a third presently.

Expect a lot more mergers over the next couple of years as Beijing seeks to curtail capacity form the current 1.1 billion tons to some 980 million tons by 2020.

PREVIOUS POST:
Value of U.S. Imports of Steel Hits $2.7 Billion in October
NEXT POST:
October Housing Starts Up From September But Down Year Over Year