OECD forecasts dismal times ahead for the U.K. economy

Having topped the European league tables with the highest number of infections and deaths due to the coronavirus pandemic, the U.K. looks set to top the recession league table, according to a recent report by the Organization for Economic Cooperation and Development (OECD).

The OECD is quoted by The Guardian newspaper as saying the U.K. will experience the deepest recession of any nation in the developed world this year (although Italy and Spain will not be far behind). 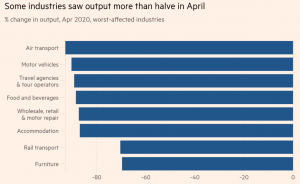 There are a number of factors at play, but key among them according to the OECD is the importance of the service sector to the U.K. economy.

Trade, tourism, real estate and hospitality together make up a sizable chunk of gross domestic products and all have been hard-hit by the lockdown.

Even by the end of 2021, the economy is expected to be 5% below pre-crisis levels. 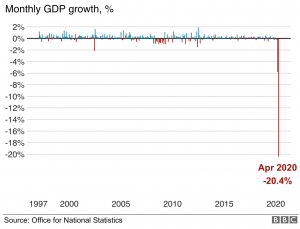 In April the economy contracted over 20%. While there was some recovery in May — as manufacturing began to return to work — the services sector has remained closed into June. With only non-essential retail shops opening this week, most other sectors remain closed.

The U.K.’s services sector suffered from the effects of lockdown more than any other part of the economy.

The Financial Times reports the five largest contributions to the 25% fall in GDP over the months of March and April came from retail, construction, manufacturing, accommodation and food services, and education. Those sectors accounted for 14.3% points of the total decline and accounted for 57% of the total compared with their 36% share in the economy.

Worst hit of all were some subsectors, where output almost ground to a halt.

The most affected industries in the service sector were: air transport, which contracted 92.8% in April alone; travel agencies, where output fell 89.2%; food and beverage services, which were down 88.5%; sales and servicing of motor vehicles, which dropped 87.3%; and hotels, down 86.9%, the Financial Times states.

In manufacturing and construction, motor vehicle production in April also came close to a standstill with a decline of 90.3% in output and a 40.1% drop in construction in April. Both have now largely returned to work, but car output is hampered by social distancing slowing production rates and a lack of demand, suggesting sales for the year will fail to make up for lost ground. According to AutoExpress, 20,247 new cars were registered in May 2020, down from 187,724 in the same month last year. However, the May figure was up significantly from the mere 4,321 new models changing hands in April.

A V-shaped bounce is therefore considered unlikely for the economy, however optimistic the stock markets may appear.

Falls in employment and investment will cast a shadow over consumer demand this year. A habit of saving built up during the lockdown may take some months to ease, rather than present a tsunami of pent-up demand, as some economists have hoped.