The Automotive Monthly Metals Index (MMI) increased by 8.1%, as palladium prices surged in the early part of the month and renewed COVID-related restrictions in China impacted automotive operations. 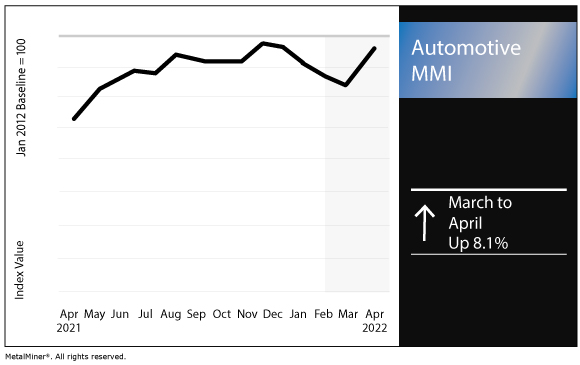 While many parts of the world have started to roll back COVID-related restrictions, a resurgence of cases in parts of China has led Beijing to ramp up mitigation efforts.

In keeping with its zero-COVID policy aims, the cities of Changchun and Shenzhen have shut down in response to a surge in COVID cases.

MetalMiner covered the shutdowns in the weekly newsletter this week.

“China announced additional COVID-related lockdowns, in particular the closure of half of Shanghai now (with the other half to close April 1),” MetalMiner CEO Lisa Reisman and Don Hauser, vice president, business solutions, explained. “In addition, the country has shut down manufacturing in Shenzhen and the city of Changchun. Tesla announced it would shut down for four days in Shanghai. Lockdowns slow economic growth, as exports will slow (despite ports remaining open).

“A slow-growing China with lockdowns has forced the oil price lower. When oil prices fall, so do metal prices — that, in fact, is what we see now.”

Make sure to keep up to date with metals commentary and analysis from the MetalMiner team in the weekly newsletter.

The shutdowns impacted a number of automakers operating there, including Toyota and Volkswagen.

As we continue to track the impacts of the Russia-Ukraine war, one metal we’ve focused on is palladium.

The palladium price surged to nearly $3,200 per ounce in early March on the heels of Russia’s invasion of Ukraine. 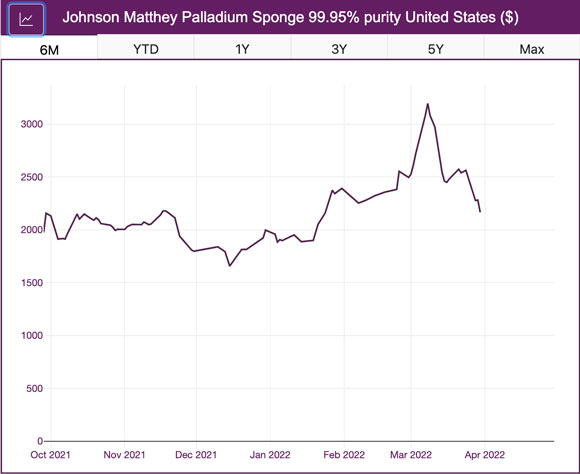 While countries around the world have imposed various sanctions on Russia, the London Platinum and Palladium Market announced no changes to its Good Delivery list.

“Due to the terrible events taking place in Ukraine, the LPPM has reviewed its Good Delivery list and the US, EU and UK sanctions,” the LPPM said in a release March 8. “Following that review it has decided to make no changes to the Good Delivery list.

“We will however continue to monitor and review the situation.”

Since then, however, the price has retraced significantly. The palladium price has dropped by nearly a third, closing $2,165 per troy ounce last week.

MetalMiner co-founder Stuart Burns touched on the automotive impact of the war.

“For example, Renault closed its Moscow plant because of a lack of parts,” Burns wrote. “Many manufacturers have voluntarily closed plants in Russia, including Toyota, Mercedes-Benz, Hyundai, Ford and BMW. Cross-border trade in car parts is rapidly drying up.

“At some stage, automakers in western Europe could also be hit by a lack of palladium supply.  Russia produces some 40% of global supply. South Africa is the next largest producer. However, South Africa does not have the ability to ramp up to cover the shortfall.

“Nor are stocks significant enough to carry industrial users through a prolonged outage. A shortage of semiconductors hit global automotive production last year. However, automakers increased output as they found workarounds. Some customers took delivery of new vehicles found with compromised capabilities compared to the ordered specification.”

Global semiconductor sales reached a value of $50.7 billion in January, the Semiconductor Industry Association reported. That marks a 26.8% year-over-year increase. However, the January total declined by 0.2% from December 2021.

While global sales were robust in January compared to a year ago, the lingering semiconductor shortage continues to hamper automotive production.

Unfortunately for automakers, semiconductor supply chain challenges are not likely to be resolved any time soon.

“The lengthiness of the chip shortage boils down to one overarching factor: A significant surge in demand, driven by digital transformation and accelerated by the pandemic,” Deloitte said in a December 2021 review of the semiconductor shortage. “And consumer devices aren’t the only thing, or even the main thing, driving this demand. Every mechanical product in industry is becoming increasingly digital, and every vertical sector is becoming ever more reliant on digitization.”

As for the timeline, Deloitte forecast the shortage to continue through this year, at least.

“Deloitte Global predicts that many types of chips will still be in short supply throughout 2022, and with some component lead times pushing into 2023, meaning that the shortage will have lasted 24 months before it recedes, similar to the duration of the 2008–2009 chip shortage,” the consultancy reported.