The Copper Monthly Metals Index (MMI) rose by 3.5% month over month, as copper prices have continued to trade sideways. 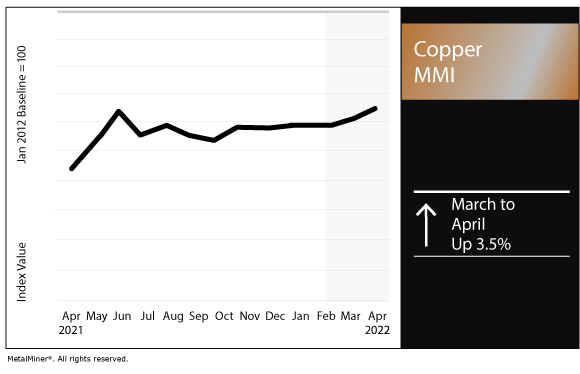 Copper prices continued to trade within a sideways range. This costs industrial buyers purchasing opportunities due to the overall risk of holding inventory in the event of sudden, volatile price fluctuations.

Traders, however, took advantage of this range to scalp prices. This means they take quick positions making money on copper price fluctuations. As a result, that creates risk for industrial buyers. They don’t know whether to hedge or cut down on purchases.

By understanding how to use copper forecasts to place hedges or change buying strategies, see why it’s important to spot the price trend.

For the first time since December 2018, the Federal Reserve raised interest rates last month, opting for a 0.25-percentage-point hike.

The all-but-confirmed increase made no substantial market impact, however, as it was expected and largely priced in prior to its formal announcement.

However, Fed officials did brace markets for the possibility of subsequent, larger rate hikes to combat inflation.

“If we conclude that it is appropriate to move more aggressively by raising the funds rate by more than 25 basis points at a meeting or meetings, we will do so,” Chairman Jerome Powell said, according to Reuters.

Officials also penciled in six additional hikes during each of its upcoming meetings for an expected total consensus funds rate of 1.9% by the end of 2022, 1% higher than December expectations, according to one report.

As the Fed pulls its levers to combat rising inflation, investors appear to be expecting an aggressive Fed.

An important portion of the U.S. Treasury yield curve inverted in late March. The benchmark 10-year Treasury note fell below that of the two-year note. A prolonged inversion is a leading indicator of an upcoming recession. The typical delay between the two is between 12-24 months. (The shortest measured around six months.)

Conversely, copper prices continue to climb near record levels, albeit slowly. Like the yield curve, markets also regard copper prices as a leading indicator of economic health.

Does this mean Dr. Copper lost its touch?

Historically, copper prices undoubtedly fall alongside a decline in economic health due to the broad use of copper in industrial applications, although not necessarily in tandem. In fact, during the recessions of 1970, 1973, 1980, 1990 and 2008, prices rose ahead of and into the larger economic downturns before their inevitable drop.

In 1990, there was a one-month window between the onset of the recession and copper hitting a peak. Meanwhile, in 2008, the window stretched to seven months.

Should a recession follow the latest yield curve inversion, it’s safe to assume copper prices are bound for decline.

Meanwhile, the pursuit to raise taxes on miners continues in Peru.

The election of leftist President Pedro Castillo in 2021 brought the mining sector into the spotlight. Castillo campaigned on sharp increases to taxes on firms and won considerable support within mining regions, including those plagued with community-driven blockades.

Actually raising such taxes, however, has proved difficult for Castillo amid a divided congress and staunch industry opposition.

According to the National Society of Mining, Oil and Energy, Peru’s current tax on mining profits sits around 50%. Meanwhile, Chile’s is at 40%.

In a recent interview, Oscar Graham, Peru’s current minister of economy and finance, said the administration remains focused “on the surplus profits.” Although the “margins (of the adjustment) are being evaluated,” it appears the new push will be less ambitious than prior targets, as the minister noted the importance of competitiveness and investment in the mining sector.

Additional taxation will, however, look to calm the many and some ongoing protests that have frequently disrupted production.

“We have to look at the issue of the efficient use of resources provided by mining, otherwise we will have recurrent conflicts in the country,” Graham said, according to Reuters.

Meanwhile, data from the Peruvian Ministry of Energy and Mines indicated mining tax revenues jumped by 60% in 2021 upon record high copper prices, totalling $1.67 billion from $1.1 billion in 2020.

The MetalMiner weekly newsletter covers copper developments, in addition to other important metals.